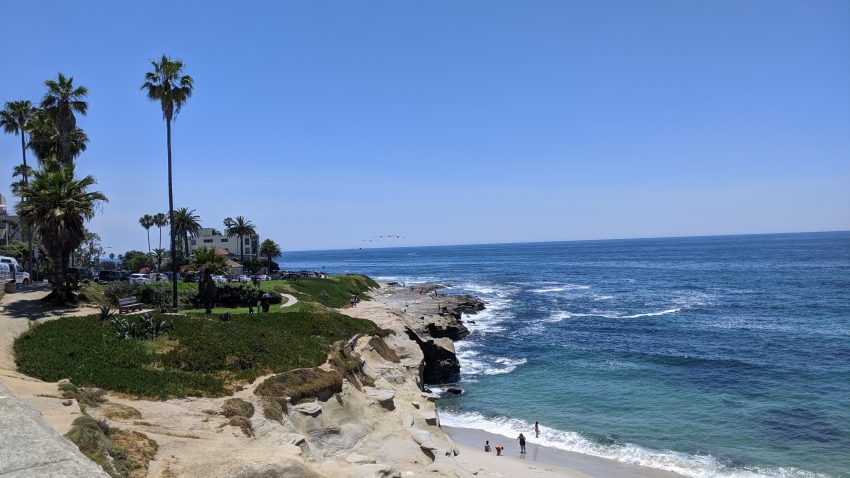 From my parent’s home near Santa Barbara Daniel and I drove down to San Diego, where we stayed for three days. Even though San Diego is only three and a half hours from where I grew up and one of my younger sisters went to college at San Diego State, I hadn’t visited the city since I was a kid. Similarly, Daniel was so young during his last visit that he didn’t remember anything about SD.

One of the things Daniel and I wanted to accomplish on our road trip was to try to narrow down where we’d like to live when we get jobs and settle down again. (Thinking about how both of us are unemployed right now still feels really strange.) So, knowing that San Diego has lots of jobs in technology, this was one of our motivations to visit the city.

When we visited in mid June, most of the major attractions a tourist would do in San Diego were closed, such as the Zoo, SeaWorld, and the Midway museum. (I think all of these have since opened.) So instead we spent a lot of time driving around, looking at different neighborhoods, and trying to get a sense of what it would feel like to live there.

The few days we were in town coincided with a heat wave that hit the entire state, so the coast was packed with people trying to get to the beach. Daniel and I walked along the La Jolla Cove and spent a couple of hours at Mission Beach. That was where Daniel declared that he had “become a beach person.” After years of insisting to me that he “didn’t like beaches” two weeks of Southern Californian ocean apparently sparked the realization that it was specifically the beaches in Texas he’d grown up visiting that he didn’t care for. Since I grew up by the ocean I was very supportive of Daniel’s beach-epiphany. I feel as though I’ve converted someone to a new and better way of life.

Other than the beach, Daniel and I spent part of an afternoon walking around Old Town San Diego, which was full of little knick-knack shops and restaurants selling Mexican food. We also spent part of an evening walking though Little Italy, a few blocks of the downtown that are home to several Italian restaurants, bars, and shops.

My parents, who have spent much more time in San Diego than I, recommended that we visit the USS Midway, an aircraft carrier that has been turned into a museum. This was closed during our trip, so instead we got to see the Midway from the shore, and visit the Unconditional Surrender statue that stands on the dock next to the Midway. It is huge, much larger than it looks in pictures.

We weren’t in San Diego for very long, but our overall sense of the city was that it felt very laid-back. Even though it’s the second-largest city in California, it didn’t have the “big city feel” in the same way as either San Francisco or Los Angeles. With the coast, hills, and canyons the geography felt very diverse. It was nice to spend a last little bit of time on the coast before heading east, though the bleak landscapes of the Southwest.