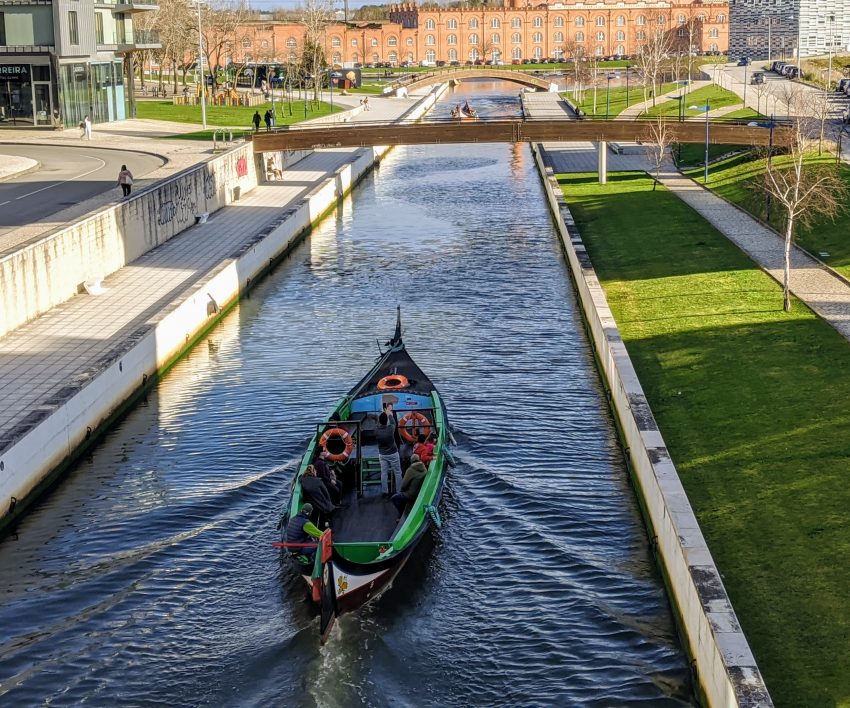 Near the end of our time in Portugal Daniel and I decided to take the train to Aveiro. We picked this city by looking at maps of the train lines going in and out of Porto and Googling the different stops to see if any looked interesting to us. Aveiro is a coastal city south of Porto. It took about an hour on the train to arrive.

On the ride down, I was looking out the window at the coast when I started to notice huge piles of sticks on the tops of some of the telephone poles. “What are those?” I asked Daniel, but he had no idea. Then I saw one with a giant bird standing on top. Both the bird and the nest were so big that at first I thought they were fake–like some kind of installation art piece. I eventually realized that they were storks. I had never seen a stork before. They are so much bigger that I had imagined; maybe not big enough to carry a baby, but still giant. Since their nests are so big and high up they’re easy to spot and I started to notice them everywhere.

I got really excited about the storks. (The storks may have been my favorite part of visiting Aveiro.) I used my phone to read up on them on the train ride, and here are some interesting facts about storks: First of all, these birds are monogamous and the same couple returns to the same nest every year; so if a stork makes its home on your chimney or roof, they’re there for good. In some places it’s actually illegal to disturb stork’s nests, because they are viewed as being a good luck omen. Also, storks don’t have vocal cords, so they make noise by “clacking” their beaks. We heard this later in the day and it is surprisingly loud (think woodpecker noise x10) and carries for a long way.

Anyways, Aveiro is a fairly small city that has a little bit of that “beach town vibe.” It’s sometimes called the “Venice of Portugal” because there is a system of canals that runs through the city. Now, I haven’t been to Venice (yet), but I think that this comparison might be an insult to Venice. There are canals, but they’re fairly narrow and run though concrete channels that follow major roads. If you’ve ever seen the sad phenomena that is the LA River, that’s basically what the canals in Aveiro are like. Aveiro tries to play up the Venice thing, and there are motor-powered “gondola” rides, which TripAdvisor reviews generally describe as “fine.” (We did not try this.)

Aveiro is known for being the birthplace of the ovos moles sweet, which are sold in shops all over the city. I mentioned these in my pastries post, but essentially they are a mix of egg yolks and sugar encased in a thin communion wafer crust and shaped like a seashell. I found them pretty terrible–little sacs of saccharine goo that coated your mouth with an unpleasant flavor. Daniel liked them though, and said he could have eaten more, so go figure.

I don’t mean to make it sound like Aveiro is a bummer to visit, because it really wasn’t. It’s a cute little city that’s nice to walk around. It was much more colorful than Porto–the tiles on the houses were in brighter hues, the sidewalks were all covered in different patterns of black and white stone, and it just seemed like a cheerful place. There are some beautiful parks and several churches with opulent interiors to see as well.

While we were in Aveiro we took a fifteen minute Uber ride to the Vista Alegre porcelain museum and factory. The museum is in a complex of several buildings including a cathedral and movie theatre that used to house a large porcelain factory and the factory workers’ families. It’s kind of like the old ceramic equivalent of Hershey city in Pennsylvania. We were able to visit the huge kilns where the pottery was baked, as well as look though rooms and rooms of beautiful pieces that the factory had produced. It was interesting to see how the fashions in dinnerware and tea sets followed the general stylistic trends. If you ever wanted to know what a cubist sugar bowl would look like, this is the place to visit.

The factory still produces some pieces, though on a much smaller scale than previously, and my favorite part of the museum was when we visited the workshop where the painters were hand painting various higher-end pieces. The room was brightly lit and absolutely silent. All of the painters were women and they were very talented. We saw some painting these huge dinner platters with photorealistic flowers, and every single one looked identical. I was blown away.

The museum has a gift shop where they sell hand-painted items, and it’s like an art gallery. I would not visit with small children, because some of the pieces for sale were thousands of euros, and I shuddered to think of the cost if you were to upset an entire display.

I asked Daniel what he’d thought of Aveiro on the train back to Porto, and he said, “pleasant.” I’d agree with that judgement; Aveiro is cute, and kind of charming (and there are storks!). The canals, while vastly overrated, are unique. I recommend seeing the porcelain museum, but otherwise I’d suggest just packing a picnic and visiting as a low-key day trip.