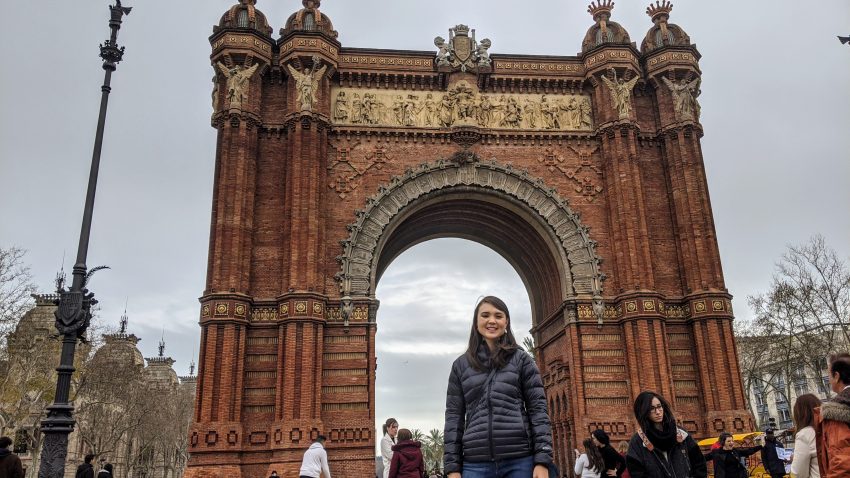 We landed in Barcelona after an eleven hour red-eye flight to the most severe rain storm I have ever experienced. There were strong winds, thunder, lightning, and heavy rain. It sounded like the world was ending. The landing was very bumpy, and all of the passengers had to disembark from the plane down a set of steps, so everyone and their luggage got soaking wet. If that wasn’t miserable enough, something in the airplane dinner had disagreed with Daniel and he spent 30 minutes of the flight puking it up into the toilet—which is difficult and unpleasant to do in a plane bathroom. We took a taxi to the apartment we are staying at, and discovered that the heat didn’t work at all. Needless to say, we felt miserable and it was a rough first night. “Leaving San Francisco to come here was a terrible mistake,” I thought as I huddled under all of our blankets and tried to get warm.

Luckily, everything improved from there and once I’d gotten some sleep the situation seemed less dire. The rain let up a little and then stopped, the apartment owner sent a handyman to fix the heater (clogged input filter), and after a couple of days I got over the crazy jet lag and started to feel like a human again.

This time of year is the “off” season for Barcelona, which gets a lot of beach tourism during the warmer weather. However, other than the rain-pocolypse storm we had for the first couple of days, the weather here is very like that in San Francisco. It’s in the mid-fifties during the day and often overcast. It’s a little chilly, but not cold, which is a good thing since our strategy to live out of carry-on luggage for an extended time period hinges on not needing any bulky cold-weather clothing.

We’ve been in the city a bit less than a week now, and we’ve been spending our time hunting down landmarks and wandering through the different neighborhoods. The city of Barcelona has two main parts: there is an older section near the shore known as the Gothic Quarter which was the original old city dating to roman times, and a newer section that was built starting in the 1850s when increasing industrialization caused a population boom. The newer section has planned streets, so the blocks are a very even grid in this area. One thing that’s a little strange is that many of the blocks are actually octagons as opposed to squares; the corners of every intersection have been lopped off to give cars a place to park and pedestrians cross on the tops of the octagons. This means that even if you are trying to walk straight down the road you need to walk in a wiggly line. Overall, it is a very walkable and bikeable city, and otherwise the metro system is cheap and easy to understand.

Something surprising I discovered is that there are wild parrots in Barcelona. They’re not a native species, but there are quite a few of them and you’ll see entire flocks of them in parks. It’s a little bit strange to see them hanging out with the finches in the cypress trees, but they seem to be thriving.

The local language here is Catalan, which to my ears sounds a little bit like a cross between Spanish and French, but as Spanish is the official language of the country, most signs are translated into both languages and most people seem to speak both. I took three years of Spanish in high school, but those lessons were over ten years ago at this point and I remember very little. However, I still remember enough that I can get the general gist of labels in grocery stores, get my order across at a restaurant, and tell people that I do not speak Spanish when they try to ask me anything complicated (Lo siento, no hablo! Hablas Ingles?). Overall my very mediocre Spanish has been more useful than I would have thought, especially since Daniel doesn’t speak it at all. (He took Latin in high school, so you can imagine how useful that has been.)

The grocery stores in Barcelona have a much poorer produce selection compared to the States. Greens don’t seem to be a large component of the cultural diet. Doing some research I found that the vegetables used in more traditional dishes are eggplant, tomatoes, peppers, and green onions—so none of the leafy green ones. There are lots of tomatoes for sale, and I don’t know where they are importing them from, but they are perfectly ripe, which is impressive.  In California at this time of year the only tomatoes for sale are pale and mealy. The markets also have a very expansive meat section, with lots of different seafood options. Seafood, especially white fish, is common in traditional recipes.

After three days of trying to make do with some horrible instant stuff we bought that tasted like hot dirt, we caved and started going to a coffee shop every morning. It was the right decision. The coffee shops here are much nicer and much cheaper than those in San Francisco. You can get a latte (cafe con leche) and a pastry for about 1.5 euros. The shops never seem to be crowded, so you can sit around and drink your coffee and use your computer at your leisure. Spain has a big cafe culture, people will sit around in coffee shops and chat for hours, which is a vibe that many coffee shops in SF try to replicate but don’t achieve as successfully.

On the topic of pastries, Daniel discovered a local dessert, churros con chocolate, which is his new favorite food. For about three euros you get a bunch of little churros and a cup of very thick hot-chocolate-esque sauce to dip them in. Neither the sauce or the churros are very sweet, so it doesn’t leave you feeling like you just mainlined liquid sugar the way some desserts do. I never really liked churros, and now I understand it’s because I had always been eating them plain. I don’t know why we never dip them in anything in the States—the little ridges on them make them perfect for grabbing sauce.

All in all, we are enjoying Barcelona. It has a very laid-back atmosphere, despite being such a big city. Or it could be that we are just more laid back, now that we are not working. Whatever the case, we are finding out time here relaxing.