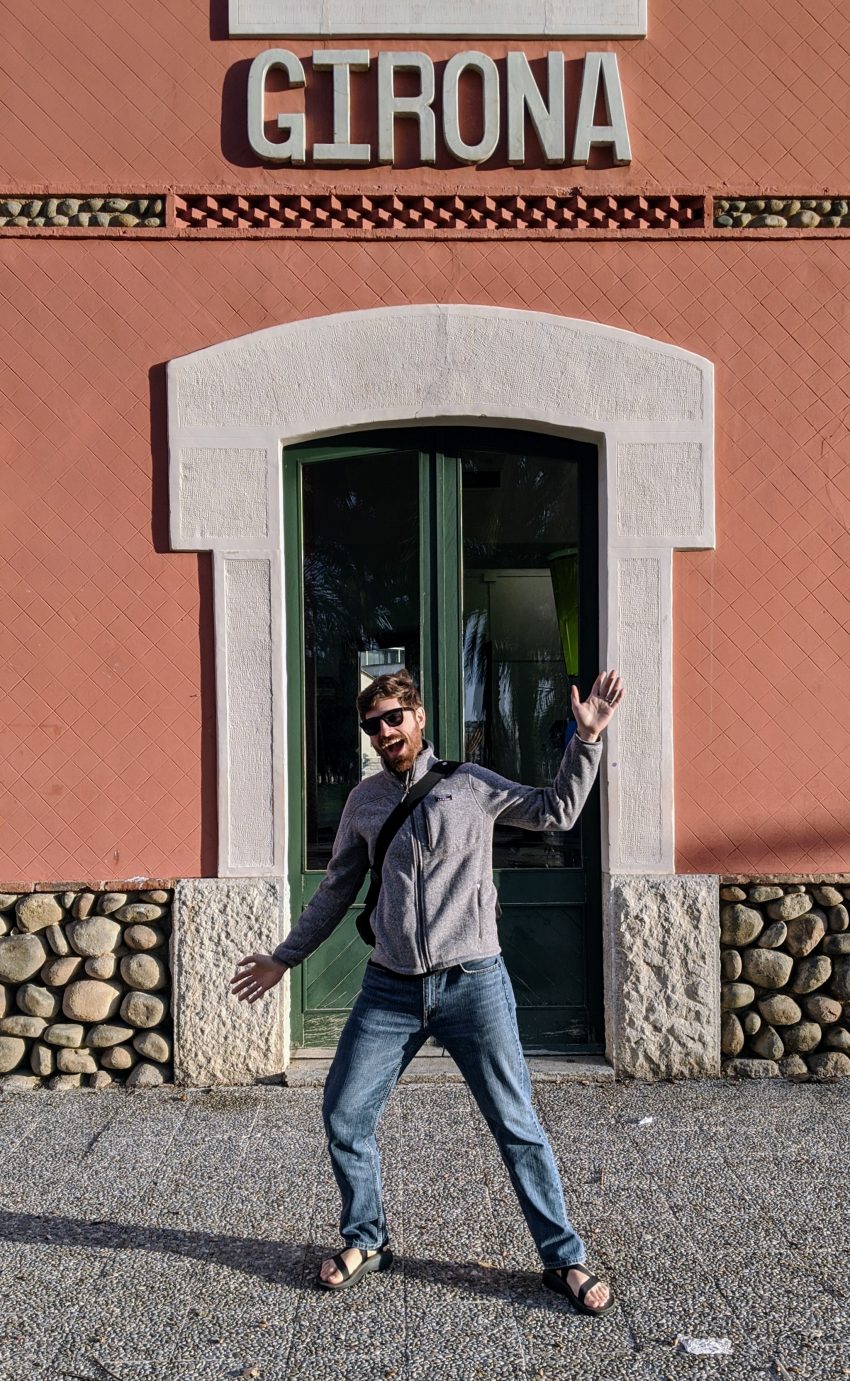 Daniel and I wanted to get out of Barcelona for a little bit, so we decided to take a day trip to Girona. Girona is a much smaller city (100k residents) about 60 miles north-east of Barcelona and is a popular tourist destination due to its historical architecture.

By high-speed train, the trip was only about a half an hour. We had read some horror stories about Spanish trains, but booking a ticket was easy and the train itself was pretty comfortable. This past summer in France we had a language-barrier disaster that caused us to miss our train from Paris to Bordeaux, ever since Daniel has been a little bit paranoid about train travel, but this experience was very uncomplicated.

The landscape we traveled through reminded me of the agricultural areas of southern California–lots of farming, little towns, and rolling hills.

The city of Girona was cold and felt very empty. It seems that they don’t get many tourists this time of year. At some of the sites Daniel and and I were the only visitors, and while it was nice not to fight crowds, it was a little bit eerie.

The first thing we visited was Girona Cathedral, a massive stone church dating back to the 700s. Like many old cathedrals, it’s been added onto and modified many times over the centuries, so that it is currently a mix of different architectural styles. The exterior has been used in several movies and tv series, it appears in Game of Thrones as a filming location for Bravoos and some of King’s Landing. It’s elaborately decorated inside, with lots of gold alters, statues of various saints, and marble coffins for long-dead bishops. The primary style is Gothic, with some Baroque, and Romanesque influence–it seems like every hundred years or so a new bell tower or chapel was tacked onto the main body of the church. I find it funny that this mix of styles is something we extol in older buildings but criticize in modern construction. (Maybe the difference is just time? Maybe in a few hundred years architectural tours will be given through the Dallas suburbs.)

After the cathedral we visited the Church of St. Felix. It’s a little bit smaller than the Cathedral, but is famous for its spiky-looking bell tower and for housing the tomb of Saint Narcissus.

Narcissus is the patron saint of Girona, and there are statues of him all over the city. His tomb in particular is tied to the legend called the Miracle of the Flies. Apparently, back in the late 1200s the French were trying to take over Girona and were plundering all of the churches in the process. Some soldier gets the idea to open up Saint Narcissus’s coffin to see if there’s anything valuable inside. But, when he does thousands and thousands of poisonous stinging flies come out and attack the French soldiers who eventually retreat and leave the city entirely. Girona actually has an annual celebration to mark this miracle and there are lots of paintings depicting the event. To me this entire story sounds terrifying, like something out of a horror movie, and having so many statues of killer flies around the city was a little bit creepy. Daniel didn’t think so, but his high school mascot was a mosquito (the Mesquite Mosquitoes) , so he might be desensitized.

(In writing this I realize that I have no pictures from the inside of either of the two churches. It seemed insensitive to photograph such a religious space? Look up pictures if you are interested–the interiors are very impressive. )

Girona has been taken over seven separate times and under seige twenty-five times. As a defensive measure, a wall was built around the old city around 100 AD. Some of these fortifications are still intact, and Daniel and I walked them, along the walls and between guard towers. Since the city is so old, most of the downtown streets are narrow and windy cobblestone roads. As a result, lots of people will drive to the perimeter of the old city and walk or bike in. So when you stand on the city walls and look inwards you see lots of ancient stone architecture, and when you look outwards you see a giant parking lot, which is an interesting contrast.

In conclusion, I think Girona is worth a visit if you are interested in ancient and medieval architecture. (But if looking at old buildings is not your thing, this might not be the place for you.) I recommend you wear comfortable shoes, because you will spend a lot of the day going up and down cobblestone streets and steps. Daniel and I had a good time, and it was nice to get away to a smaller, slower city for a day.

1 thought on “Day Trip to Girona”