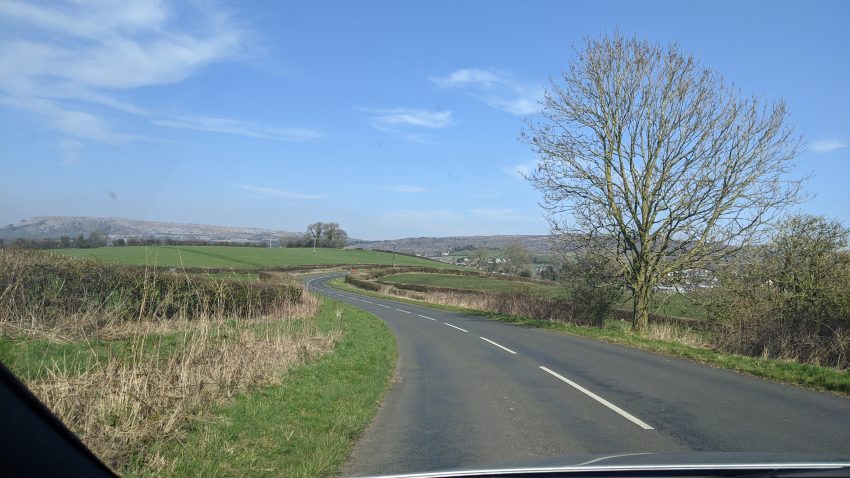 As part of our ad hoc trip to The UK, we decided we wanted to stay at a more remote place in the countryside. A consequence of this is that we’d need a car to get around. After doing research, I found out that I could legally drive in the UK with just a US license. So we booked a car and planned out a short road trip through England before getting to our countryside stay.

I was nervous about our plan since I’ve never driven outside the US and haven’t driven any car in 2 months. Additionally, the UK seemed like a more daunting place to drive than most since they drive on the wrong side of the road and sit in the wrong side of the car. On the bright side I do speak the language (mostly) so I’ve got that going for me.

All I did to prepare for driving in The UK was about 30 min of panicked reading and youtubeing the night before picking up the car from the rental company.

I only had to go about 500 yards from the rental agency to our apartment in London, but it took the better part of 20 minutes due to London roads being confusing, and random roads being closed for construction. I did eventually get back to our apartment and parked the car (possibly illegally).

We loaded up quickly and headed to Brighton, the first stop on our road trip. Getting out of London was stressful for the same reasons as getting to our apartment was rough and at some point there was a driver honking and shouting at me. I eventually figured out that he had spotted that one of my doors was slightly ajar and was just trying to tip me off.

The UK categorizes their roads into 3 main categories, M, A, and B. M roads (motor roads) are similar to major US highways and are generally 2 or more lanes with on/off ramps. A roads are sometimes nearly highways with 2 lanes going each way, but with occasional intersections or roundabouts, but sometimes A roads are also 1 lane roads that would be closer to a stay highway or country road. B roads are generally much smaller, almost always 1 lane roads that sometimes go down to 1 lane shared by each direction. Each road type is labeled by it’s type and a number.

We were able to get onto one of the A roads outside of London. I pulled over about halfway to Brighton to relax and get a bite to eat. After a short rest, we continued on to Brighton without incident.

The second day was much easier and we mostly drove on 1 and 2 lane A roads between Brighton and Bath. Some of the roads were a bit unnerving and there were tons of roundabouts to navigate, but overall it was not too bad.

On day 3 we drove from Bath to Nottingham. The road out of Bath was a super narrow B road (country/farm road in the US), but then it was an easy drive until we got into Nottingham. Getting to our hotel proved challenging due to poor directions from Google Maps and confusing roads where I had to make five different turns on five different roundabouts in the span of about 30 seconds.

On day 4 we drove from Nottingham to near Liverpool. This was the easiest day by far due to it being mostly on the motorways which are what Americans would think of as a highway.

On day 5 I was feeling cocky so I deliberately mapped us to some small back roads to get better scenery. This turned out as a great idea, the weather was great and due to the ongoing virus issues, the roads weren’t particularly crowded. We made it into our countryside stay safe and are now looking forward to relaxing for a bit. As a complete aside, I pulled off into a service station that I randomly saw on Richard Hammon’s Youtube channel from a day before. I realize this is weird, but it brought me a lot of joy to be that close to one of the ex-top gear presenters.

Based on my experience I thought I’d compile some advice and general thoughts on driving in the UK. I found it fell into 2 categories, general advice for driving in a foreign country and specific differences between the UK and USA.

Your primary goal for driving anywhere should be to not hit anything. As long as you don’t cause an accident any other mistakes will be minor in comparison. So when you’re unsure about what the right thing to do in a new country is, just stay calm, don’t crash, and you’ll be fine.

Before you get started on the road take as much time as you need to familiarize yourself with the car you are in. Adjust the seat position and mirrors, figure out where the gear knob is, locate the windshield wiper and headlight controls, etc. Once you start moving it’s good to remind yourself that you’re driving on the left side of the road. I go so far as to tell Erika every time I start the car though after a day or two I probably didn’t need to.

Use a mapping application, and if your car has a way to display the map on an easy screen use it. I usually use Google maps and it is good enough to give hints on what lane to be in and which exit to take for a roundabout. On the subject of roundabouts, England has way too many of them. There were sections of major roads (basically highways) we were on where there would be a roundabout every quarter of a mile or so. Also Google maps refers to basically any turn as a roundabout even when it’s clearly just an intersection so trust your eyes over the computer.

If you are traveling with someone, enlist them to be your second set of eyes and navigator. Let them handle the mapping application and have them interpret the directions for you. Also have them keep an eye out for staying in your lane and other obstacles you might miss.

Stick to major roads for the first day or two before venturing off the beaten path. England has awesome B roads, but I wouldn’t recommend them till you’re feeling a bit more comfortable.

When it comes to driving in the UK I recommend preparing by watching 5 or 10 minutes of other people doing it to get a feel for things. Also review the UK road signs and markings. You don’t need to know each and every one of them, but knowing some basics like a circular sign is generally a “you must do this” sign and a triangle is a warning sign. Also they have odd speed limit rules in the UK. There are often speed limits posted (circular signs with a number in miles for the limit) but then you may notice a circular sign with a diagonal line in it like a do not smoke sign minus the cigarette. This means to resume the “normal” speed limit for the road you are on, this varies based on the road, but is generally 60 or 70 mph.

The UK has lots of minor roads that are a blast to drive and have great scenery, but oftentimes they will be one car wide but traffic goes both ways. If you find another car approaching one of you should pull over and let the other pass. There isn’t a ton of logic to this, mostly people just sort it out.

When you’re on a multilane road, stay to the far left lane unless you are passing someone. This is generally the rule in the US too (right lane instead of left), but in the UK people actually expect you to do it and can/do write tickets for not following it.

Don’t speed. They have a bunch of speed cameras in the UK and will ticket you for being even a bit over. I found that using my cruise control nearly constantly was a good way to avoid getting tickets.

So far driving in the UK has been a blast and it’s nice not to have to lug all our stuff everywhere we go. I’m planning on getting my IDP (international driving permit) next time I’m in the states so we can do more road tripping across the globe.

Hopefully my experience can help some of you to feel more comfortable doing something similar.