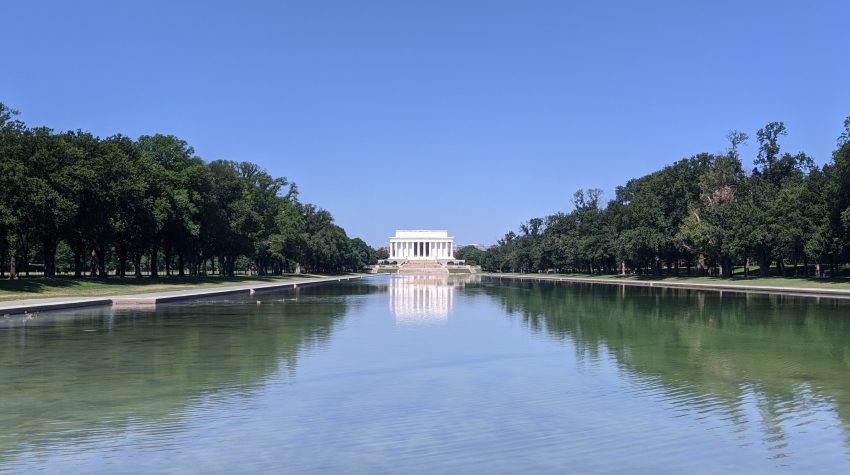 From Raleigh-Durham Daniel and I continued driving north up the east coast. On our way through Virginia we stopped at Colonial Williamsburg, a town recreated to look like a colonial village and staffed with actors who go around in old-timey dress doing old-timey jobs. It’s kind of like a big interactive museum. We saw “George Washington,” took a look at a colonial kitchen, and toured the governor’s palace.

It was very interesting, but horrifically hot and humid. I did not envy the actors in their long sleeves and skirts at all. It makes me wonder how the colonists bore it. Compared to the weather in England, which is cooler in the summer and warmer in the winter, Virginia must have been a very unpleasant experience. I wonder how many thought that they’d made a terrible mistake in coming over.

The capitol was no less hot and humid. It wouldn’t have been so bad but with all of the shops and restaurants closed due to the pandemic there was no relief at all from the heat. Maybe this was one of the reasons that the city was so empty. There was no traffic and most sites were not crowded at all.

Daniel and I walked around the National Mall and visited the Abraham Lincoln Memorial, the Vietnam War Memorial, the FDR Monument, saw the White House and Washington Monument. Unfortunately, all of the museums, Smithsonian, Air and Space, etc, were closed. Luckily, Daniel and I had a chance to see them when we visited last October (and during that trip I thought it was way too cold–I guess there’s no pleasing us.)

In the evening we met up in a park with my little sister, Kathy, and her fiancé, Brian, and had dinner. They live right next door in DC in Maryland, and when offices were open Kathy would commute to DC. Brian teaches at the University of Maryland. It was good to see them and I respect them more for having to live in that humidity every summer.

After DC we drove up to Philadelphia. On the way we drove through an area of Baltimore that was the roughest neighborhood I’ve ever seen. Once we got into Pennsylvania however, the scenery changed to rolling green hills and farmland. It reminded us of the grassy fields we saw in England. It was very pretty and rural. I also saw an Amish couple driving a horse and buggy down the highway, which was actually kind of scary since they were going so much slower than the surrounding traffic and it seemed to me like someone would rear-end them any minute.

When you reach Philadelphia the landscape jumps pretty abruptly from farmland to city. Philly is big, crowded, and has some not-so-nice areas where I wouldn’t want to be walking out at night. Daniel and I saw the Liberty Bell, Independence Hall–where the Declaration of Independence was signed, walked the Benjamin Franklin Parkway, and ate cheesesteaks at the Reading Terminal Market.

Then we drove 30 miles north-west from Philly to Valley Forge, where George Washington famously braved a terrible winter with his troops during the Revolutionary War during which there were no shoes and everyone got frostbite and starved. (Or at least that’s how I remember my high school history teacher describing it.) Turns out old Georgie was actually spending his days and nights in a heated home, which is still standing—no frost bite for him.

This is where I saw my first ever beaver in real life; it was just ambling across the parking lot like it was going for a little walk. They’re pretty cute, like big guinea pigs with slappy tails.

Daniel and I were relieved to get out of Philadelphia. To be honest, neither of us liked it very much. It is possible we would have had a better opinion if we hadn’t been staying in a pretty sketchy area of the city or if more had been open.

From Philly we drove to New York City where we had lunch with Daniel’s cousin Will and his wife Katina at their home in Brooklyn. We chatted with them about our travels in and out of the US among other things.

Then we drove to Boston.

Daniel and I both liked this city. We didn’t spend very much time there, but I think we would be interested in coming back for a longer visit. (But not in the winter.) It helped that Boston is where the heat and humidity finally broke—the highs only got into the 80s, which felt amazing after a month of the high nineties.

Downtown Boston is full of neat old brick buildings. Lots of the townhomes seemed to have round “towers,” which I thought was pretty nice looking.

Just outside of the city I forced Daniel to stop by the childhood home of Louisa May Alcott, the author of Little Woman. We also passed Walden Pond, which was located in a much more built-up area than I had envisioned.

I found it very interesting to see so many historical buildings and sites on our drive up the east coast. It really drove home how much younger the west coast is in comparison.

It also made me realize how different the big cities are from the rest of the country. I’ve concluded that the wealthy live in the cities, along with the very poor, while the working middle class is more likely to be out in rural areas. It was striking to see how different the “nice areas” in the cities we saw were from the “bad areas,” and how different those both were from the more homogeneously middle-class countryside. Daniel told me that there is a saying that goes, “Cities are good places to be very rich and very poor,” which seemed to describe the situation pretty well.