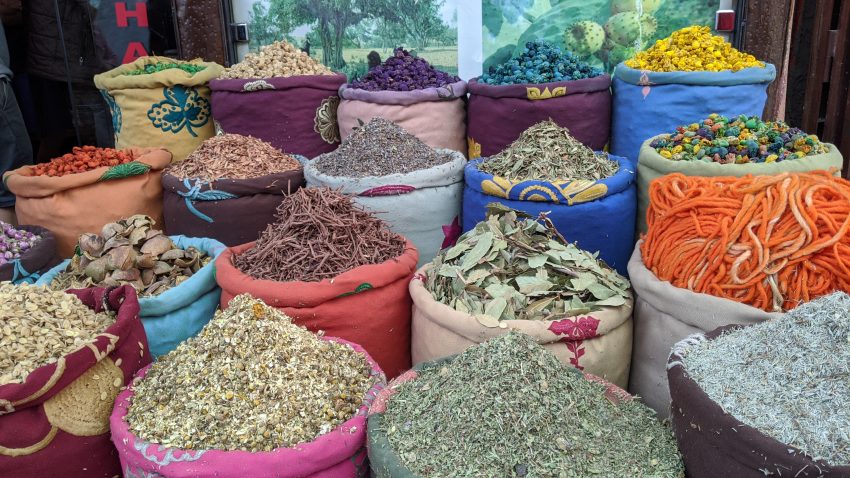 After three weeks in Porto, Portugal, Daniel and I took a one hour flight south to Marrakech, Morocco. I knew that Marrakech was a popular travel destination and since I expected it to be very touristy and full of other vacationers I really didn’t do as much research ahead of time as I probably ought to have. It wasn’t until a few days before we flew out that I started to look online for travel tips, and it was then that I started to get worried. I read numerous articles about the different scams locals will use to try to take advantage of visitors, about how female travelers should dress modestly in long, loose clothing, how drinking the tap water will make you ill, and the sexual harassment you should expect if you are a woman. Reading all of this two days before flying to Marrakech gave me a serious moment of, “what have I gotten myself into?!” I went out and bought a couple of long-sleeve floor-length dresses and a bottle of Imodium and hoped for the best.

Daniel and I were staying in a riad in the Marrakech medina. In Morocco and some other African countries medina is used to refer to the older, walled part of town. A riad is a traditional style of Moroccan house that is built around a courtyard. Nowadays many riads have been converted into bed and breakfasts for travelers. Daniel and I found many websites that recommended staying in a riad as they tend to be closer to the downtown and are usually really cool historical buildings. We stayed in Riad Mehdia, which was very conveniently located and served us breakfast every morning.

The medina is Marrakech is crowded and bustling with tourists, locals who live within the walls, and vendors. The medina is built around the main square, Jemaa el-Fna, which is full of food stands, snake charmers, henna artists, people in traditional costume, and spice sellers. Outside of the square is a maze of narrow streets. They are too narrow for cars, but there are lots of donkeys pulling carts and people zipping around on scooters at full tilt through the crowds. As a pedestrian you need to constantly be on the lookout because there is a very real chance that you could be run down by a scooter.

What is there to do in Marrakech? Mostly it’s shopping. There are some beautiful gardens that we visited and some very lavish palaces, there are some fancy mosques as well (though you can’t enter those as a non-muslim), but the truth is that most people seem to come to Marrakech to shop. Most of this shopping happens in the souks, or the outdoor markets that surround the main square.

Entering the souks is overwhelming and disorienting. It’s loud, the walkways are twisting and convoluted, it’s packed full of people, every stand has a huge, colorful assortment of goods on display, and the air smells heavily of spices and scooter exhaust. Also, most of the paths are covered with corrugated tin or wood which makes it feel like you are in a tunnel. Marrakech is known for its spices, especially saffron and solid perfumes. Other common items for sale are ceramics, leather goods (mostly shoes and bags), kaftans (which are widely worn by locals), and carpets.

Buying anything in the souks involves haggling with the seller. I had read online that vendors in Marrakech haggle very aggressively, and I found this to be true. I’ve bargained with sellers in Mexico and Thailand before, but bargaining in Morocco is a whole other beast. Be prepared for the vendors to get in your face, try to keep the conversation friendly because they will not hesitate to scream at you if they get mad, and don’t try samples or even take pictures of their wares unless you are willing to cough up some money, because they will demand it and get very angry if you don’t pay. Daniel and I found that we were routinely able to get sellers down to half of their first price, which meant that price we first offered was around 30% of theirs. The vendors will quote you whatever they think they could possibly get you to pay; shop around and do some research because the markup is insane and they will not hesitate to take you for a ride.

We also discovered that it’s the norm to bargain down your taxi fare, which I had never experienced before. Again, we were able to get them down to about half of their original price. Alternatively you can insist that they run their meter, but in all likelihood it will be “broken.”

I witnessed the scariest driving of my life in Marrakech. Road signs and markings are seen merely as suggestions as opposed to rules. Cars would weave wildly between lanes. Scooters and motorcycles would be carrying entire families–mom, dad, and two kids and an infant–and no one wore helmets. Everyone drove at breakneck speeds and would pass on blind turns. Now and then you’d come across a slow donkey cart and cars would pass it by swerving into the opposite lane of traffic at 80 miles an hour regardless of what was coming that way. Getting into a car in that city is like throwing dice with Death.

Daniel and I spent most of our time wandering through the souks shopping and eating street food, but we also tried to see some of the other sights. We visited Jardin Marjorelle, which was beautiful but so crowded with “Instagram girls” trying to get the perfect pose that it was seriously hard to get around. We also visited the much lower-key Jardin Secret which is in the medina, and which I enjoyed a lot more. I also liked going to Bahia Palace, which is a huge fancy compound some Grand Vizier built for his harem in the 1800s. Lastly we saw the Saadian Tombs and El Badhii Palace, both of which I found overpriced and overrated.

Moroccans speak a mix of Darija (a dialect of Arabic), Berber, French, and English. They are also predominantly Muslim. In the medina you will hear the calls to prayer being broadcast from the various mosques five times a day. (This is a little rough when you are awakened at five am by 20 minutes of loudspeaker noise.) It also means that almost all of the local women wear hijabs. Unfortunately, as a result, if you are a non-muslim woman you are pretty obviously a tourist, which makes you a target of aggressive vendors who will approach you and try to pressure you into to buying their wares.

The weather at this time of year was perfect. The highs were in the low seventies, and it was comfortable to walk around. After three cold, overcast weeks in our Porto apartment with no heat I was thrilled to be somewhere warmer. I think that weather-wise this is the ideal time to visit–later in the year it can get really warm and since most of the things to see and do are outdoors I could see that being pretty miserable.

We were in Marrakech for four full days, and it was a good amount of time to explore the medina and hit up the major attractions. Marrakech was totally different than Spain or Portugal–different vibe, different religion, different pace of life. After our low-key time in Portugal I really appreciated the engrossing business of Marrakech.

2 thoughts on “Four Days in Marrakech”