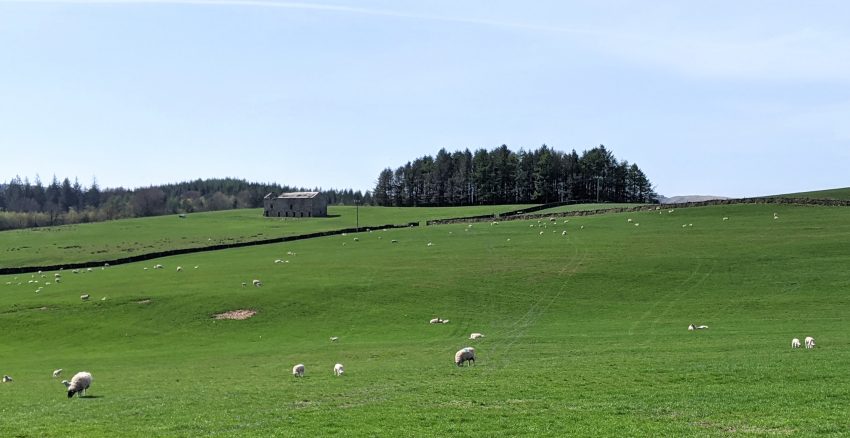 Daniel and I have been in rural England for the last three weeks, and we plan on staying here until it becomes easier to travel. When we realized that quarantine was imminent, we decided to go someplace rural where we’d have more space and an easier time avoiding others.

We’re staying in the area between the Lake District and the Yorkshire Dales. It’s very rural. The first cottage we rented was in a small village of around twenty houses and no shops or restaurants. A week ago we moved about a five minutes drive away to an old stone farm house that is a mile down a one-way, unmaked farm road. There are no houses within sight of ours, and we are surrounded on all sides by fields of sheep.The closest “real town” is Kendal, about twenty mintues away by car. It’s very beautiful, with hills as far as you can see covered with perfect green grass that it almost looks fake. Daffodils grow wild all over the sides of the road, and they are in full bloom right now, which is very pretty.

Sheep farming is big business out here, and most of the fields are filled with ewes (female sheep) and their lambs. Daniel and I have been doing lots of running and walking to get out of the house, and usually go through the fields of sheep. There are many public walking paths that you can follow that involve climbing over the fences between different sheep pastures. I found this surprising at first — I had never heard of public walkways going through a farmer’s property. I guess the reasoning is that sheep are harmless animals, and most people who live here are so used to them that there’s nothing interesting about being in close contact with them.

I’ve always liked sheep. In college I had a field of sheep as my desktop background on my laptop because I felt that they looked so calming. Now that I see fields of sheep all day every day, I can confirm that it is calming. Sheep are very zen animals.

They also seem like very low maintenance creatures. Unlike in America, there are no coyotes or wolves to prey on them, so they live fairly unmonitored lives roaming from pasture to pasture and chewing grass. Many of the sheep have lambs, either one or two (twin births are apparently quite common in sheep and happen more than half of the time) that trail after them wherever they go.

When lambs are newborn they are so small, about the size of a house cat, and very, very cute. While the mother sheep seem to live pretty slow paced lives, we’ll often see the lambs running across the field, or jumping around with other lambs. The lambs are adorable–it makes me seriously consider starting a sheep farm. Unfortunately, the money side of sheep is in slaughtering the lambs for meat (the wool makes very little profit), so I don’t think I could ever do this. Maybe I could have pet sheep.

Speaking of pet sheep, the sheep here are not tame and won’t let you touch them. I have tried to lure them with carrots, spinach, grass, and hay, and none of them have been interested. When the mother sheep is afraid that you’re getting too close to her babies, she’ll bleat loudly until they run back to her. They will let you get fairly close, but they will watch you suspiciously, ready to run away if you reach for them. At our current rental the sheep will often come up to our back door and look through the window at us.

When we first arrived I thought that the entire town smelled like sheep. But now after three weeks I don’t notice it at all. I probably smell like sheep. I will say that many of the fields out here will mix sheep manure and water into a mixture called “slurry” that they spray for fertilizer, and this does smell horrible. Daniel and I had the misfortune to drive too close to a tractor slurry-ing a field and our car got covered in slurry. It was terrible.

I’ve now written 500 words about sheep. But that’s what I’ve been spending my time doing: watching sheep, researching sheep, trying to pet sheep, counting sheep, talking to sheep. I can go two days without seeing another person, but I can look out my windows on any side of our house and see at least fifty sheep.

Other than hanging out with the sheep, Daniel and I have been passing the time by going on lots of walks. Besides the sheep pastures there’s a small river, the Lune, that is very pleasant to walk along.

Daniel has also discovered a love for jigsaw puzzles. He always told me that he hated them, and now it seems like he can’t get enough of them. He’s done three so far.

He also got really into cooking pasta. I have no complaints at all about this.

I started to knit a scarf, though now that I’m almost done with it the weather has gotten much warmer, so who knows what I’ll do with it.

I’m looking through the pictures on my camera, trying to remember how we’ve been spending our time but literally, it’s just pictures of sheep.

It sounds very boring, and maybe it is, but actually we are having a great time here. I like the sheep, and I don’t mind being stuck out here for a while. It’s very peaceful. Overall, while being locked-down somewhere was certainly not in our travel plans, being here is pretty nice. Hopefully the time will come soon where we can resume our trip, but for now we are resting and relaxing with the sheep.

1 thought on “Locked-Down with Sheep”