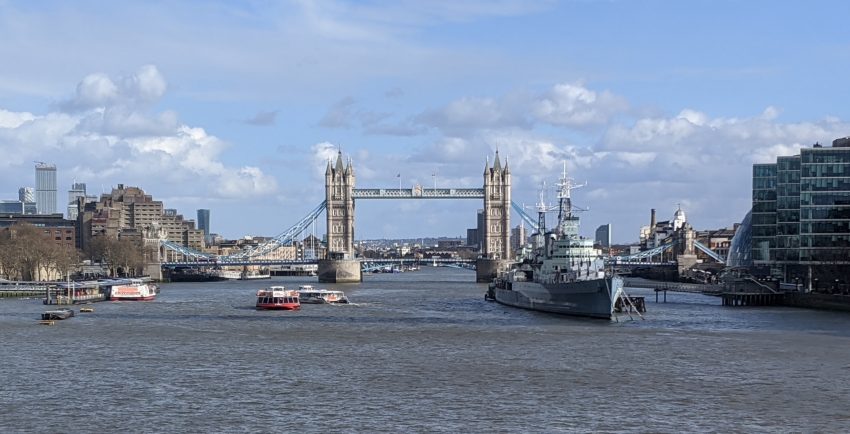 Daniel and I ended up in England unexpectedly, when we had to catch a last-minute flight out of Italy when the country went on coronavirus lockdown and the PM ordered non-residents to leave. Because of the unplanned nature of our arrival, we didn’t have any plans for what to do, and had only booked one night’s accommodations. (Which was a hotel Daniel found on his phone as we were boarding the plane.) Additionally, by the time we landed in London we’d been in three different countries in two days and just pulled an all-nighter outside of the airport. We were both tired and disoriented.

The cheap hotel Daniel had booked on his phone actually turned out to be a really cute building with a duck pond in the front and a field of trees behind it. If we hadn’t been so exhausted I’m sure we would have appreciated it more. Instead, we checked in and then slept for about twelve hours.

It wasn’t until late the next day, after we booked a longer stay at an apartment, that we got into London. My first impression was that it was cold. Soooo cold. Daniel and I had planned on visiting the UK, but we had been aiming for the Spring and I definitely did not pack for the London winter. (I ended up buying a beanie and scarf, which did help.)

Coming out of Italy, where the country had essentially shut down around us, and coming into London where everything was open and business was proceeding as usual, was very strange. This did slowly change over the course of our stay (we were in London for a week), but in the first few days things were busy and restaurants were crowded.

I had never been to the UK before, and Daniel last visited when he was in high school, so in the first couple of days we did all of the standard touristy things: We watched the changing of the guard, went out for tea, walked over London Bridge, saw Westminster Abbey, visited Sherlock Holmes’s address, and ate Sunday roast at a pub.

The apartment we stayed in was close to Hyde Park, and I often ran there in the mornings when it wasn’t too cold. (The first day I went for a run, it started hailing, which was horrible.) Despite the cold weather the city was actually very pretty, because all of the cherry blossoms were in full bloom. Daniel and I spent a lot of time walking through Hyde Park, looking at the flowers and feeding all of the different water birds that lived by the lake.

Probably our favorite part of visiting London were the museums. Similar to Washington D.C., London has tons of museums and many of the larger ones are free.

We first visited the Victoria and Albert Museum, which had a really extensive exhibit of casts. Essentially, the museum had made full-size duplicates of all sorts of famous sculptures, monuments, and even entire building facades. In a single room you could see Michelangelo’s David, part of an ancient Egyptian statue, Trajan’s Column, the entryway to Venice Cathedral, and the tomb of a martyr, etc. I was so impressed by this. What a good idea! If you have enough copies of all the important art and monuments in one place then people don’t need to travel to see them. It seems like an easy way to democratize art. I have no idea why more museums don’t do this.

We also went to the British Museum where we got to see the mummies, which was very interesting. I didn’t realize they had so many of them. I was also very impressed by all of the ancient Greek pottery on display. It’s almost hard to believe that so much pottery from over a thousand years ago is still around, and just how well some of it has held up over time. Whenever I see exhibits like that I wonder what from our time will be displayed in museums two thousand years from now.  I asked Daniel, and he thinks it will be Ikea furniture.

Lastly, we visited the Imperial British War Museum. I probably learned more about WWI from an hour in their exhibit than I did from all of my high school history classes put together. In my experience, American schools tend to gloss over that WWI, since our country didn’t get involved until near the end. I am normally not very interested in history, but I thought that the exhibits in this museum were very well done. The exhibits were arranged in chronological order, so that walking through them felt like watching a documentary.

We got around the city by taking the Tube and walking. The subway system is very extensive; it seems like there’s a stop every block. It is pricey to ride, but since London charges up to twenty-five pounds a day to drive downtown, it’s a bargain by comparison. Like many European cities, it’s very walkable (when it isn’t freezing cold). And it’s nice to walk because there are so many unique old buildings you come across that you wouldn’t otherwise stop to see.

One afternoon I dragged Daniel to the Liberty London Department store. If you sew or follow the online sewing community, you may have heard of Liberty Cotton fabrics. These are textiles produced by the Liberty London Store, usually printed with small, busy, floral patterns. Typically, these fabrics are used to make women’s button-up shirts (not sure why, but that’s the traditional use for them). I loved seeing the floor of fabrics, and Daniel was kind enough to feign interest.

As the city started to slow from the coronavirus precautions, Daniel and I spent less time doing organized activities and more time wandering through the different London neighborhoods. We saw Camden Market Street and Portobello Road, two areas known for their shopping and street vendors. I was surprised at just how many middle eastern restaurants the city seemed to have. In America it’s easy to forget just how much closer the UK is to Asia, but when you visit the influence is evident.

I was also surprised at how large London felt. It wasn’t particularly dense, but it was sprawling. To me, it seemed like the city just went on and on forever. Looking at the (literally) hundreds of stations listed on the subway map was a little bit overwhelming. I think you could probably spend three months in London and still feel like you had only scratched the surface. As it was, Daniel and I spent a week there, and I felt like we only got a glimpse of what there was to see and do.