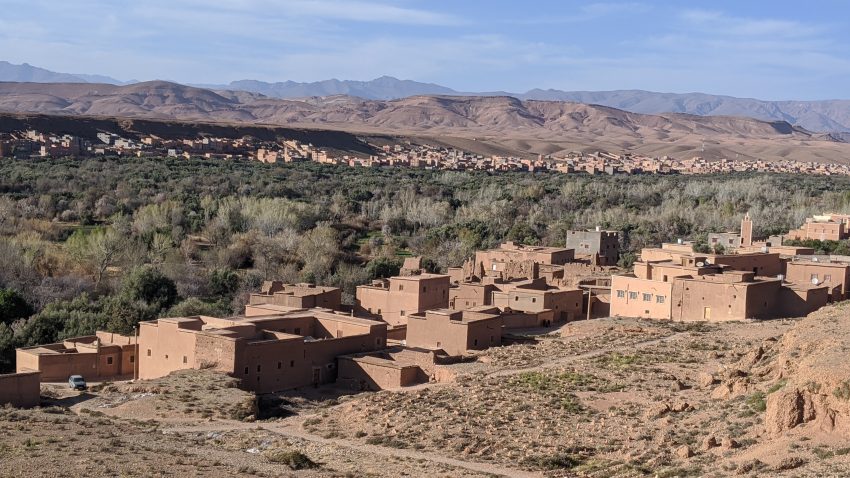 Compared to America, Morocco was very different both culturally and geographically. It was by far the “most different” country we’ve visited so far, and as a result traveling there felt like more of an adventure. There were lots of firsts: our first time in Africa, first time in a predominantly Muslim country, and first time seeing a camel outside of a zoo. We tried lots of unfamiliar foods, heard unfamiliar languages, and learned about the history and government of a part of the world I had honestly never given much thought to. There were some less-than-great experiences (which I’ve written about), but also lots of really amazing experiences. We learned a lot and overall we had a good time.

If we were to visit Morocco again we would make some changes to our itinerary. We would still go to Marrakech, but we would skip Fes. Also, instead of spending three days driving across rural roads to the Sahara and back, we would just take a day-trip from Marrakech to the Atlas Mountains, and if we wanted to ride a camel we would find someplace in the city to do it. Next time I would love to visit Chefchaouen, a city that is Pintrest-famous because all of the buildings are painted shades of blue. We skipped it this time because Chefchaouen is a four hour drive from Fes, and by that point in our trip I was completely done with driving.

When we were planning our trip I must have read 20 articles of travel tips for Morocco. So, now that we have had some time to reflect, here are our tips for visiting:

We visited Morocco at the perfect time of year. It was warm during the day, but it never got too hot. Since most of the touristy activities involve lots of walking outdoors, having good weather is important. At the same time we were told that the time of year we visited was still before the main rush of visitors, so we were able to avoid the crowds that come in the later in the season. If you want to see Morocco, the late-winter early-spring is a good time to do it.

Stay in the city’s medina

The medina refers to the older, walled portion of a city. Most of the large cities in Morocco (Marrakesh, Fes, Tangier, etc) have a medina section, and as a tourist most of the “cool stuff” to see and do is in the medina. It can be cheaper to stay outside of the medina walls, but if you want to see any of the main attractions or shop you will probably be walking into the medina most days anyways. And since it can be kind of scary to walk around the cities, staying close to the sights will make your stay less stressful.

Stay in a riad

A riad is basically a bed and breakfast in a traditional-style home. In both Fes and Marrakesh there were tons to riads to choose from when booking–they are a very common accommodation for tourists. They’re nice to stay in because they tend to be really beautiful, traditional buildings. In addition, most allow you to order dinner, and the food they serve is better, cheaper, and more authentic than most restaurants you’ll find in the tourist spots.

Also, one of the pluses of staying in a riad is that the staff will help keep you safe from getting scammed. They can help you set up tours that are legit, tell you how much you should pay for certain items, recommend good restaurants, book your transit to and from the airport, etc. In an unfamiliar place it’s nice to know that you have someone in your corner.

My only exception to this recommendation is if you are traveling with little kids. There is not a lot for kids to do in Morocco (unless your kids are really into architecture or shopping for handcrafted homegoods, which they probably aren’t). So, in that case you may as well get a hotel with a pool, fast wifi, and cable TV so that they can amuse themselves.

Change some of your money right away, in the airport or before your trip

Airport money-changers take a huge cut; it’s terrible. I try to avoid them whenever possible. But Morocco is a very cash-based country, and I’m not sure we used a credit card at all in the time we were there. Have some cash right at the start of your trip so that you can pay for a taxi, buy food, etc, until you find an ATM.

Be careful about what tours you take

If you read any of my other posts about our trip you know that we had some bad experiences with tours and tour guides. It is very common for tour guides to take the group to a shop where they know the owners and will get a cut of the sales. This can happen even if you book through a legit tour company or the official Office of Tourism (both which we did). I have seen some tours listed on Trip Advisor and similar sites as “No Shopping” tours, so if I were to do it again I might give those a shot.

Come with space in your suitcase

As a tourist you will probably spend a lot of time shopping. And there are some great deals in Morocco compared to what you would pay for similar items in America. If you are into leather goods, rugs, or metalwork, you will love it here. You just need to have some way to take your purchases back with you. While you could technically ship it to yourself, even the locals think the Moroccan postal system is slow and difficult to navigate. And if you ship via DHL or some alternative carrier the price will be much higher. Unless you’re buying a huge rug or a dining room table that you must ship home, your best bet is to pack it.

Culturally, people in Morocco are much less okay about being in your photo–even if they’re just in the background. I definitely saw some people covering their faces when they thought I was going to take a picture that included them, which made me feel bad. Always ask before taking a picture.

For some performers, like snake charmers, dancers, monkey handlers, pictures are how they make their living, so you should expect to pay. Even in cases where it’s a store or street vendor, ask before photographing their goods, because they may not be okay with you taking a snap of their carpets/plates/shoes/etc. Daniel and I definitely saw vendors yelling at people who had tried to sneak a picture.

Brush up on your bargaining

You bargain for everything; it’s just how business is done. Be firm, but friendly, and don’t be afraid to walk away if you feel like they’re trying to rip you off. (And they will try to rip you off.) Also, don’t believe them when they tell you how much money they’re losing to you, how their wares are handmade by their arthritic grandmother by candlelight, how they will sell only to you at this price because they can tell that you’re a good person, etc. They wouldn’t sell to you if they weren’t making a profit. Don’t feel bad about bargaining them down.

Ignore the hustlers, and when you can’t ignore them, be firm

If you read about our experience in Fes, you know that the street harassment and hustling in that city is bonkers. The best way to avoid the scammy scammers is to ignore them. This is basically my MO for all street harassment, even in America. Just don’t engage when people yell at you, ask you questions, etc. I always just pretend that I don’t hear the speaker, and if they grab me or get in my face (it happens) I just shake my head and look confused.

This comes easy to me, but ignoring people killllllled Daniel. I think it’s a Texas thing, he was just raised to be too friendly for his own good. People would come up to us and ask, “where are you from?”. I’d try to keep walking, but Daniel would answer, “California!” and it would start a ten minute conversation where they tried to pressure us into letting them “guide” us. After, like, the fifth time this happened I basically had to give Daniel a stern talking to, and he stopped engaging in these situations as often, and life was better.

In situations where you can’t ignore people, be clear that you are not interested. There is no place for the easy-letdown. Don’t say, “Your bags are beautiful, but I don’t have room to pack them,” because then they’ll tell you that their uncle’s cousin’s roommate works for the postal service and can cut you a deal on shipping, or that they can use a vacuum to compress the item into a little cube, etc. Just say, “Thanks, but I don’t want a bag.”

It’s Africa. It’s hot and sunny even in the winter. You should always pack sunblock anyways. Sun protection is never a bad idea.

The tap water will make you sick, so you’ll need to buy bottled water. If you have an insulated bottle you can use it to keep the water cool. Also, if you have part of a bottle left over from a restaurant meal you can just pour it in and not worry about wasting it.

And that’s it! Hopefully if any of you guys plan a trip to Morocco (after the coronavirus craziness passes) this helps you out.