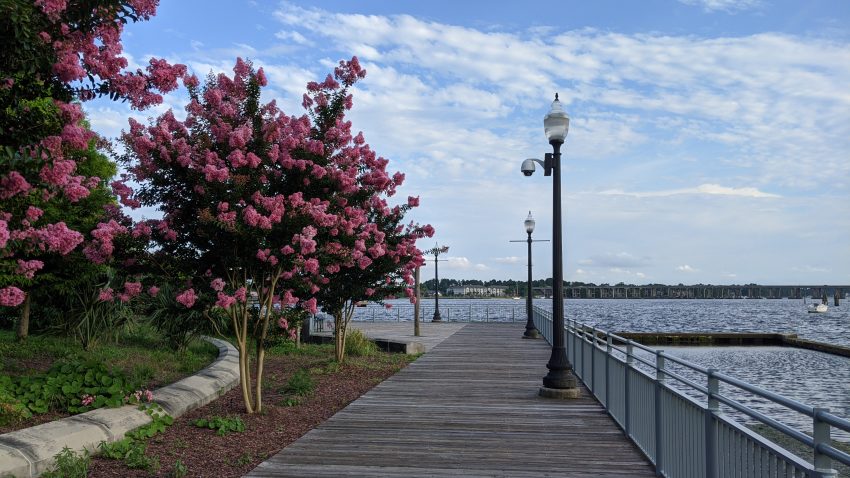 Erika and I spent about a week in North Carolina.

New Bern is a town of around 30k people at the fork where the Trent and Nuese rivers meet. It’s near the Atlantic ocean, but not quite coastal. Its location gives it a warm and muggy climate in the summer.

New Bern’s main claim to fame these days is that it is the birthplace of Pepsi Cola. Erika and I visited the pharmacy where it was invented. They have an old fashioned soda fountain where you can get custom sodas, a small exhibit of Pepsi history, and a gift shop with tons of Pepsi memorabilia.

New Bern also has a pleasant river walk area with public parks along it that we walked along in the evening. Because of the climate the riverwalk had a tropical jungle sort of feel to it. It’s pleasant to look at, but not always pleasant to be out in.

We spent five days staying in Cary, NC which is near the center of the Research Triangle of  Durham, Raleigh, and Chapel Hill. The area gets its name for the 3 universities in the area (North Carolina State University, Duke University, and University of North Carolina at Chapel Hill) and has a rough population of 2 million people. The whole area has a pleasantly uncrowded feel for such a populous area. Some of the feeling comes from the area being fairly sprawling, but I think it also helps that many of the housing areas have kept large wooded areas around them.

We spent a fair bit of time in the area since it’s a place that we are considering as a place to live. It has a bunch of qualities that we are looking for (low population density, low cost of living, temperate climate, good job market) but is missing a few things we’d like (close to the ocean, close to family). Since we may want to live there we spent less time doing tourism activities and more time trying to get a sense of what life would be like there. We spent a fair bit of time looking at houses in the area to get a sense of what they are like out there. Also Erika loves to drive around looking at homes.

It was still pretty warm this time of year, but it was not as muggy as where we were previously in South Carolina.

While we were there we checked out the local Mormon and Hindu temples that were both pretty neat. We drove through the Duke campus, but weren’t able to checkout their famous chapel or gardens due to Covid closures. We wanted to check out the Lemur Center at Duke University (no relation), but sadly it was closed due to Covid. We were able to go to a local public rose garden in Durham which was quite pretty. The area has a ton of public parks and hiking trails. We drove through a few state parks but didn’t do a lot of hiking due to the heat. It looks like they’d have some great hiking in the more temperate months of the year though.

North Carolina was a pleasant place to check out and next we’re looking forward to seeing some more of the east coast.