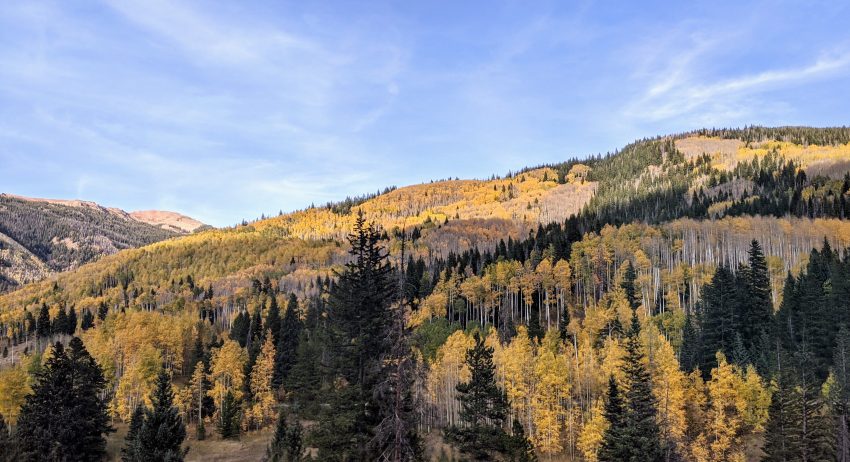 Back before the pandemic hit both my sister and Daniel’s sister had planned weddings for this summer. Rebekah, Daniel’s sister, had set hers for early June, and my sister had planned hers for late July. As we laid out a rough schedule at the start of our trip, Daniel and I figured that we would spend the first part of the year in Europe, come back stateside for Rebekah’s wedding, then spend a couple of months in South America before going to my sister’s wedding, and then head back across the world to see Asia for the remainder of the year.

Clearly, none of that happened. Instead of traveling around Europe, Daniel and I were on a sheep farm for three months, and both of our sisters canceled their weddings. My sister, Kathy, has postponed hers, while Daniel’s sister, Rebekah, had a very small backyard ceremony. Neither we nor any of Daniel’s other siblings (like me, he is one of four) were able to attend, so we decided to get together in Colorado, where Rebekah and her new husband live, and have a small family celebration for her marriage.

Since Daniel and I were still car-less we flew into Denver from Santa Barbara. Flying during the pandemic is strange. Airlines have tried hard to make things feel safe and normal, but it’s still a little unsettling and awkward. On the bright side Delta kept every middle seat on our flight open, which was nice.

We arrived in Denver late in the day, checked into a hotel room for the night, and then first thing the next morning we went out and bought a car! Daniel had been keeping an eye on listings in the Denver area since we knew we would be traveling there (and because cars are significantly cheaper in Colorado compared to California) and that’s how we found our second new (to us) car this year. It’s a 2017 VW Golf, and I told Daniel that if he hits another rock with it that I’ll banish him to bicycles for the rest of his life.

In our new car Daniel and I drove the three hours from Denver to Carbondale, the small mountain town where Rebekah and her husband live. Carbondale has a population of around 6,500 and a similar elevation. It’s forty minutes away from Aspen, and according to Rebekah many of the people who live in Carbondale work supporting the Aspen tourism industry. Also, while we were there the town was celebrating its annual Potato Day, which celebrates Carbondale’s history in potato farming.

It was a great time of year to visit; the days were still warm but the trees were changing into their fall colors. All of the aspens were yellow and red, and it made the surrounding mountains beautiful. I really liked the “small mountain town feel” of Carbondale and the surrounding area and told Daniel that I could move there. He told me that I wouldn’t be able to handle the long, cold winters which, sadly, is probably true.

Daniel’s mother, his other sister, Rachel, her husband, and their six-month-old twins drove up from Dallas to meet up with us and Rebekah. The twins are pretty cute babies. I’m sure I’m biased because I’m related to them, but I think even objectively speaking they are good looking kids. Daniel and I saw them about three months ago when we drove through Dallas, and even in the short time since then they have grown up a lot. They’re very smiley and “talkative.” I think around the six month mark is when babies start to get fun–the early period where you need to support their still-soft head kind of freaks me out. I will say that having twin babies looks like a lot of work–much more than double the work of one baby.

We spent our time in Carbondale wandering around the town and hanging out with family. We rode bikes along a trail, drove into Aspen and took the gondola up the mountain, watched the video of the wedding ceremony, and met Rebekah’s husband’s family. It was a nice and relaxed visit and we were sorry to leave.

Daniel and I hadn’t made any return plans before we’d flown out because we hadn’t known if we’d purchase a car. Since we did, we decided that we’d follow Daniel’s mom and sister’s family back to Dallas and then figure out the plan from there. From Carbondale we mapped out a route to Dallas that would take us through Kansas and Oklahoma, both states we’d missed on our first pass around the country.

Honestly, I’m sitting here trying to think of something to say about this drive that would be interesting, but the truth of it is that there isn’t much going on in this part of the world. We drove for two long days and basically saw flat brown scenery the entire time. Once you get out of the mountains and past Denver the entire east side of Colorado is basically empty of landmarks or people. That emptiness continued east to Hays, Kansas, where we spent the night, and south down the middle of Oklahoma to Dallas.

If there’s one thing that has surprised me from all of our time driving though the US it’s how much empty prairie land our country has. There are parts of America where you can drive for days and days without a change in scenery. And while I try to be open minded about different landscapes, I have to say that those flat brown prairies might be the worst our country has to offer.

Needless to say it was a bit of relief to get into Dallas.