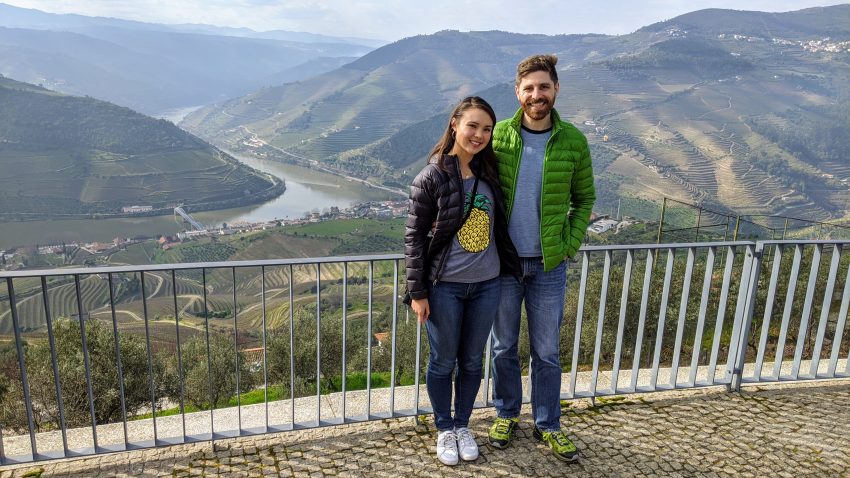 When planning our time in Porto, Daniel and I decided we wanted to learn more about the production of port wine, as making port is unique to the area and an important part of the economy. Porto and the surrounding Douro Valley region is where all port wine is produced. In the same way that Champagne must be made in Champagne, France, Port wine must be made in the Douro Valley to be considered port (at least is most of Europe–in the US they can label any old bottle “port wine”).

I am not a big wine drinker. I’m not sure I would even say that I like wine. However, I am a big fan of doing wine tours because they are an easy way to get out of the city and see the countryside, and because I really think winemaking is fascinating from a technical and traditional standpoint. Daniel and I have done wine tours in California, Croatia, and France, and it’s surprising how much the viniculture process differs from place to place. Here in Porto we did a tour where we visited a few vineyards in the valley and saw how the grapes are grown, and on a separate day we went out on our own and visited a couple of wine cellars and learned about how port is aged.

The Douro Valley is steep and hilly with extreme temperatures and rocky soil. And while all those things sound like the perfect recipe for farming hell, apparently all together they create a little microclimate suited to port wine grapes. Because the hills are so steep they usually cut into terraces, which makes the hillsides very picturesque. (It also makes the roads pretty scary. If you want to see the Douro Valley–even if you have no intention of drinking–I’d suggest getting someone familiar with the area to do the driving.)  However, even with the terraces it’s difficult or impossible to fit tractors between the rows, so most vineyards harvest, trim and plant by hand.

One vineyard we visited even proudly told us that they still stomp their grapes by foot–which, now that I’ve had some time to consider it, I have so many questions about: Do you just get members of your family to stomp for you? Or are there professional grape-stomping crews you hire? And is it easier if you’re heavier or have bigger feet?

Before this trip, I had heard of port wine before, but never tried it. For some reason I always associated it with old British men? It turns out that there is a reason for that as it was the demand from Britain that really caused port wine production to take off. Wine grapes don’t do well in Britain, so historically Brits would import wine from France. However, when war with France in the 18th century made that difficult, the British turned to Portugal for their wine supply. The only issue was that the trip from Portugal was long enough that the wine often went bad during the voyage–so the Portuguese started to fortify it, and created port wine.

Port wine is about 20% brandy. After a short (few days to a week) initial fermentation, the winemaker adds in the spirit, which kills the yeast and stops all further fermentation, while upping the alcohol content. Because of this, port wine has an alcohol content of nearly 20% — and can taste really boozy. To me some port wines taste like hard liquor, and more like something you’d down from a shot glass than something you’d sip from a wine glass. They’re definitely not something you’d have with a meal (unless you want to get real drunk real fast); instead port wines are something you might have a small glass of either before or after eating.

Port wine is aged in cellars referred to as “caves”.  Due to a mix of cool weather and low taxes, the city with the most caves is Vila Nova de Gaia, which is directly across the Douro river from Porto. Gaia is the city with the largest volume of alcohol per square meter of anywhere in the world. (And it’s interesting that while port wine is named for Porto, it’s mostly grown and aged elsewhere.)

Walking from Porto to Gaia was easy, and it was pretty simple for Daniel and I to make reservations to visit a couple of cellars. (There are also tours you sign up for that will take you around to multiple cellars, but we DIYed it, which was cheaper and more convenient.) The city of Gaia is even steeper than Porto, though, so you’ll want to wear good shoes and walk slowly. At the end of our time there my Garmin recorded that I’d gone up 90 flights of steps! (And my legs felt horrible.)

I was surprised to find out just how huge some of the wine barrels that are used to age the wine are. Some of them are large enough to park a small car inside! Because they are so large and difficult to make, the barrels are used for about a hundred years before being replaced. Not all of the wine is aged in the larger barrels, standard sized barrels are used as well, as well as stainless steel, depending on the desired degree of oxidation.

During our tastings I discovered that basically the only port wine I enjoy is the younger, less oxidized kind, known as ruby port (as it’s redder than the more aged stuff). Some of these younger ports are really sweet, and taste almost like cherry juice, which helps cut the strong alcohol flavor that some of the older wines have. These younger wines are mostly considered “less sophisticated” or “entry level,” but to my pedestrian palate they taste better, and they’re cheaper, so they’re what I’d recommend.

While we were in Gaia Daniel and I also tried pastel de bacalhau, which are basically deep fried potato and cod fish balls filled with Serra da Estrela, a cheese from sheep’s milk. We’ve eaten a lot of cod on this trip–maybe too much, we’re getting kind of sick of it–but this was one of the better ways we had it. It was nice, sort of crunchy on the outside and softer on the inside.

Also during our day in Gaia, somehow Daniel’s wallet fell out of his pocket. He didn’t notice this until an hour or so later when we went to pay for the next port tasting. After a mild freakout, we quickly retraced our steps and fortunately some good samaritan turned the wallet into the cashier at the pastel de bacalhau restaurant. Luckily nothing was lost and we he doesn’t have to replace his license and credit cards, and he’s promised to be more careful in the future.