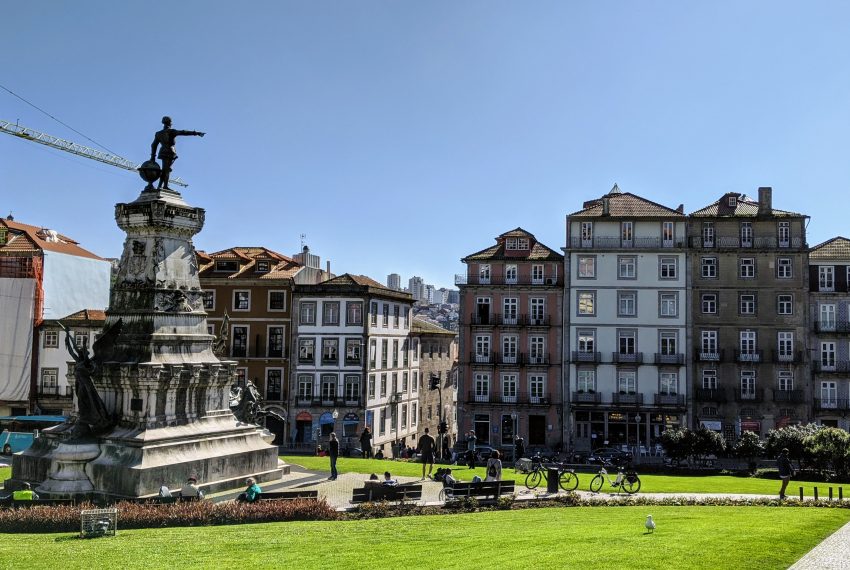 Daniel and I were in Porto for a little less than three weeks and in all honesty, it was a pretty low-key three weeks. We did a couple of day trips, which I’ve written about; we did a couple of tours and made an effort to see some of the landmarks, but there was also plenty of down time mixed in. We spent a lot of time hanging out, reading in cafes, picnicking in parks, and trying new-to-us snacks from grocery stores. So, here is a hodgepodge of the things that stuck with us from our laid-back time in Porto:

Daniel and I were not prepared for how hilly Porto is. We thought that after living in San Francisco we knew hills–but we were wrong.

I was also surprised to find that everything was closed on Sundays: cafes, restaurants, bakeries, even some grocery stores. I guess I’m just used to the Bay Area where weekends are by far the busiest times for restaurants and shops.

Speaking of restaurants, Portuguese cuisine goes hard on the olives and unlike in the States, they are not pitted. I did not expect this and bit down so hard on one that my tooth hurt for a full day.

Also, I know this will sound weird, but there are a lot of lingerie stores in Porto. It truly seemed like every other shop was a lingerie shop; you would see three or four on a single block. And by “lingerie shop” I don’t just mean they sold bras and underwear–they sold the lacy, racy stuff. Which is fine, I just have no idea how there could possibly be enough demand for all of those shops to stay in business. Maybe people here are just generally more into lingerie? IDK, and this wasn’t something I was going to ask a local about.

Things We Discovered and Think Are Worth Doing

Whenever I research a city I find all of those listicals that are like, “15 Things You Should See in Portugal” or “10 Amazing Activities in Barcelona”. For Porto a lot of what is recommended on those lists are churches, museums, and touristy shopping areas. There’s nothing wrong with any of those things, but they’re a little bit repetitive and you can probably check most of those off in about three or four days. So, having stayed in the city for three weeks, here’s some things that Daniel and I did and recommend that you may not find on a listicle somewhere:

Go to the parks! As I mentioned before, Daniel loves parks. He could go full-hobo and live in a park, but sometimes I get bored of seeing the same patches of grass with a swing set and some bushes. However, since Porto’s weather is wet and mild it’s perfect for really nice, green parks full of lots of different types of plants. We especially saw lots of camellia trees which were in bloom despite it being winter.

For a view of the city, go to Restaurant 17. You can pay to go up some of the old towers in the old town (built to watch for incoming trade vessels), but if you want an even better view you should just go to this restaurant. It’s named Restaurant 17 because it’s on the 17th floor of a hotel building, which makes it taller than almost anything else in town. If you don’t feel like eating a whole meal here, just get a drink or a coffee at the bar.

Visit the most beautiful McDonald’s in the world. The McDonald’s in Liberdade Square is famous for its stained glass artwork, chandeliers, and Art Deco architecture. It was opened in the space formerly occupied by the Cafe Imperial, which according to one person we spoke to, was where the strategy to eliminate Portugal’s dictatorship was hatched. (No idea if that is true, but that’s what we were told.) When we visited we discovered that McDonald’s in Portugal has caldo verde, a popular Portuguese soup, and peanut butter sundaes on the menu.

Go to the beach. Though we saw a lot of surfers here, we didn’t see many swimmers or sunbathers (though this could be due to the time of year we were there). There is a small sandy beach but most of the shore is rocky and covered in pebbles. It’s a good place to visit if you like beachcombing. While you’re there you can visit Fort of São Francisco do Queijo, also known as the Castle of Cheese. (A Portuguese pun.) It’s a small stone fort from the 1500s. You pay 50 cents to go inside where there’s a dive bar and a “museum” the size of a walk in closet full of old guns used by the Portuguese army. The best part is the rooftop, where there’s a good view of the ocean and you can stand in the little lookout towers and pretend you’re keeping an eye out for pirates.

Things We Did and Thought Were a Waste of Time

Every article you’ll read about visiting Porto will recommend the Harry Potter bookstore, Livraria Lello. Daniel and I went to see it on our second day in the city. But here’s the thing, it’s small, it’s crowded, you have to pay to go inside, and it’s really not a museum — it’s a functioning bookstore. So there isn’t really any information given about JK Rowling at all, like, not even a pamphlet. The building is beautiful; it was built in the 1920s in the Art Nouveau style and has a beautiful staircase and books in shelves to the ceiling, Beauty-and-the-Beast-library-style. However, there are other shops on that same street that were built during the same time that are free to enter. And there are certainly better places to go if you want to browse books. I would say it’s worth doing if you are a Harry Potter superfan or you are really into architecture, otherwise I’d just look at pictures online.

Skip the Cais da Ribeira as well. It’s a very crowded and touristy area on the riverfront. Go a couple of blocks over and the food is better and everything is cheaper.

I’ll also add that you shouldn’t pay to see any churches. A couple of the older churches will charge a few euros to see the inside, and I say just skip it. There are so many churches in Portugal, you almost can’t go down the street without passing one, and it seems like they’re all old stone buildings with very fancy interiors. Just go visit any of the other, free churches. Most are open to the public, just be quiet and respectful.

All of the pastries.

The jams and jellies. Though they are limited in other regards, the grocery stores in Porto had a huge selection when it came to different types of jam, jelly, marmalade, and preserves. We tried quite a few flavors I had never seen before. Daniel really liked the tomato jam, which was sweet, almost like a strawberry jam. I discovered a pumpkin and walnut jam that I thought was really good.

Broa, also called Portuguese corn bread. It’s very dense (the loaves are like little bricks), crumbly, and not at all sweet. It’s good with jam or soup, which is convenient because Portugal seems to have plenty of both of those things.

Serra da Estrela cheese, which is a Portuguese cheese made from sheep milk. I had never heard of sheep milk before and didn’t know what to expect. It’s a soft, sharp, and strongly flavored cheese. This is the sort of thing you’d eat with some meat and bread, not something you’d snack on plain like string cheese. Daniel thought it was a little too strong, so I’d suggest trying to get a little bit from a cheese shop to taste before committing to an entire wheel.

One of the famous foods of Porto is the Francesinha, a meat sandwich topped with a fried egg and then smothered under cheese and a tomato sauce. It’s essentially the Portuguese take on the croque monsieur. They’re good, but I recommend you split one with somebody, because they are huge and very heavy.

Though Porto is famous for port wine, vino verde (“young/green wine”) is also produced nearby. It’s a little bit fizzy, and very tart. You can buy it in any grocery store.

Eat the cod fish, but don’t overdo it like we did. People in Porto eat a lot of fish–by American standards, a truly outrageous amount of fish. And quite a bit of that fish is cod. I ate more cod fish in three weeks in Portugal than I had in the entire year prior. We had it steamed, grilled, boiled, pan fried, deep fried, in fritters, in dumplings, tinned, and in soup. I like fish and I like cod, but this might have been too much.

And that’s it! In conclusion, Daniel and I had a good time in Porto. We picked this city as a destination on a whim; I had never heard of it six months ago, and then in the same week I had two coworkers tell me about their recent trips to Porto. I mentioned it to Daniel and he suggested we add it to the itinerary, so we did. Overall, for knowing next to nothing about Porto or Portugal at the start of the trip, I’d say it went pretty well.

3 thoughts on “Porto in Review”