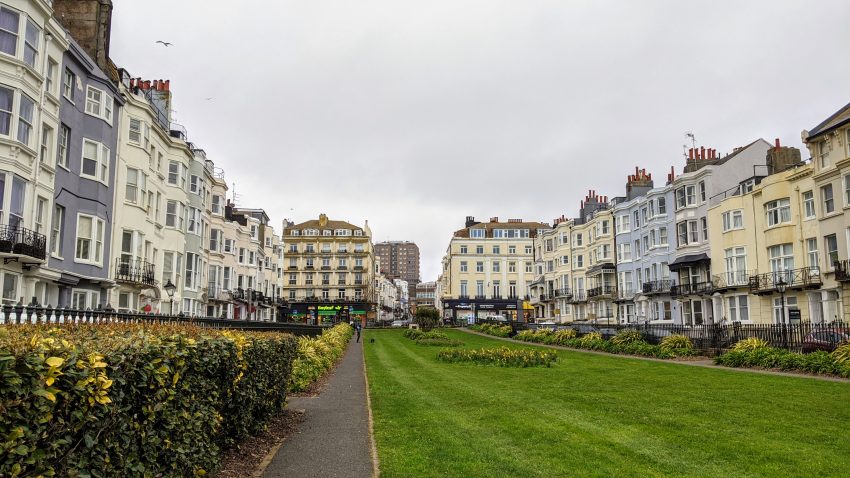 When Daniel and I were in London we decided to take a road trip through the country. We both saw the writing on the wall and realized that, like Italy, the UK was probably headed towards lockdown. Neither of us wanted to get stuck in London, so we decided to get a car, head to someplace rural, and see some sights on the way. In total, we were on the road for four days, and stayed in a different city each night.

Daniel wrote an entire post about driving in the UK, but I will add a few things. First of all, driving on the other side of the road takes some getting used to. In the beginning I was gasping every time we turned down a street, because it felt like we were going the wrong way and that cars were going to hit us. Secondly, the UK has entirely too many roundabout. I’ve always heard about how much more efficient round-a-bouts are compared to stoplight intersections, but they are a huge pain. When the entire two-lane highway has to slow down to go through a roundabout every half mile, you start to wonder why the highway designers couldn’t just build on-ramps and off-ramps like everyone else. Also, the road names are terrible. All the major roads are identified by a sequence of letters and numbers (like, A12345, A2342, M134, etc) and it makes it hard to find your exit. Human readable names would make driving much easier.

Our first stop on our trip was Brighton, a coastal city about an hour and a half south of London. I’m not sure what it was that attracted us to this city. Maybe because it was mentioned in Pride and Prejudice? Brighton is known for being sort of a young, hip, beach town with a large and active gay community. When the woman at the front desk of our hotel heard that we were from San Francisco she got excited. “Brighton is the San Francisco of the UK!” she told us. I guess that she meant that both cities are coastal and have a large LGBT population. I can’t say that I noticed much resemblance between them.

The afternoon we were in Brighton was cold, but we bundled up and walked around the city anyways. One of the main things to do there is to shop in The Lanes. These are an area of narrow alleyways full of little shops and street vendors. When we visited most of the shops were still open, but it was pretty dead. It was a little bit creepy to walk down the empty street–the shopkeepers would turn to look at us as we walked past, and I was almost too intimidated to go in any place. If you’ve ever seen Western movies where the gunslinger walks into town for the final shoot-out and all of the townspeople run and hide in their homes, peeking though their windows to watch, that’s what it felt like.

Daniel and I also visited the Royal Pavilion, a palace with domed turrets and some pretty gardens, though the building was closed to the public.

Brighton is also where we visited an ASDA grocery store. ASDA is the closest thing to a Walmart or Super Target that we’ve found outside of America (and that’s probably because it’s owned by Walmart). You never realize how nice it is to go to one stop and be able to pick up groceries, clothing, and home goods until you can’t.

It was here that we made the bizarre discovery that in England you can buy pre-made, pre-packaged, “American” pancakes. I have come to realize that the rest of the world views pancakes as quintessentially American. What makes it interesting is that when other countries recreate them they invariably put their own spin on them, so that the final product is inspired by American pancakes, but different. I’ve seen this with other “American foods” as well, like hamburgers, hotdogs, etc. After eating Chinese-American, Japanese-American, Mexican-American, etc, foods my entire life, it’s weird to go abroad and find American-British, American-French, and American-Italian cuisine. Anyways, we bought and ate some pre-packaged pancakes, which probably solidified the cashier’s view that we Americans just can’t get enough of our pancakes. They weren’t bad. Very sweet and soft.

Our second stop on the road trip was Bath, which is about a three-hour drive west of Brighton. Bath had the coldest weather we’ve experienced so far in the UK. It was really cold. Both of us were miserable.

Bath is named after the natural hot springs under the city, which were used by the Romans to build a public bathing house. Generally, you can pay to visit the Roman baths (as a tour, you can’t bathe in them), but with the corona precautions they were closed to the public when we were there.

However, we did go into Bath Abbey, which is located right next to the baths. The abbey is a big medieval cathedral built in the Gothic style. It had some beautiful stained glass, and some really neat ceiling arches.

Other than the roman baths and the hot springs, the city of Bath is known for having some of the best preserved Georgian architecture. (The style is named for what was popular during the reigns of England’s four consecutive King Georges, from 1714 to 1830.) Daniel and I visited the Royal Crescent, which is a long row of Georgian townhouses arranged in a concave shape. I was surprised at how striking the effect was. The homes are still used as residences, although one has been turned into a museum that you can visit when there isn’t an international pandemic.

We ate dinner in a completely empty Chinese restaurant. There was no official closure of restaurants at that time, but most people were not going out. Daniel and I had been on the sidewalk reading the menu that was posted in the window when the owners came out and practically dragged us in, they were so desperate for customers. We felt so bad for them that we ordered more food than we would have normally just so they could have the extra business.

In Bath Daniel and I stayed in a bed and breakfast. B&Bs seem very common in that city, and we saw at least twenty or thirty others as we walked around. The morning that we checked out we got to talking with the couple that owned the inn, and they expressed how worried they were about the drop in bookings from the coronavirus. The wife told us that that afternoon she was going up the road to see if she could find work stocking shelves at a grocery store. We had been their last reservation for a month. Coronavirus was hitting the tourist industry hard.

I will admit that I wanted to see Nottingham solely because of its association with Robin Hood. Based on movies about Robin Hood, I expected Nottingham to be small and surrounded by forests. In actuality, Nottingham is a big, industrial city full of grey concrete buildings.

The day we left for Nottingham the UK government declared that all restaurants were to be closed for everything except for take-away. Although there was no official guidance to stay home, it was at this point that things started to get really dead. Except for the grocery stores, almost everything in Nottingham was closed.

So, Daniel and I mostly saw the outsides of things in this city. We saw the outside of Nottingham Castle, which had a strange rounded shape, like a sand castle. We also saw the outside of the Ye Olde Trip to Jerusalem, which claims to be the world’s oldest bar at 1000 years old. (There’s no documentation of this, so no one can verify their claim.)

Other than Robin Hood, in olden times Nottingham was known for producing lace. Daniel and I walked through the Lace Market area of the city, which nowadays is more like a shopping district.

We also found the Sky Mirror, a large reflective sculpture shaped like a shallow bowl. Apparently it’s famous for costing 900,000 pounds and being funded by the national lottery. Mostly, I think people probably visit it because it looks cool, and makes for interesting photos.

As we headed out of Nottingham the next morning we stopped to see Wollaton Hall, a massive Tudor home set in the middle of 500 acres of “deer park.” We walked around the grounds, but we did not see any deer.

The last night of our trip was spent at Leasowe Castle, a castle dating back to the 1500s (though it’s been redone since), which is now a hotel. This place was pretty isolated. The castle is on the Wirral Peninsula, which is a very small piece of land on the northeastern side of England, about 15 minutes from Liverpool. However, despite its remote location, the day we were there we saw two separate weddings take place back to back on the grounds.

The castle was very near the shore, and Daniel and I spent a lot of time walking up and down the waterfront. The first walk we did was at low tide and I was pretty shocked at how far out the water receded. At low tide the beach stretched out for almost a mile, which was unlike anything I’d ever seen. And then when it was high tide the water rose such that it covered the sand entirely.

Daniel and I found lots of razor clam shells on the beach.

I’d been attracted to the idea of spending the night in a literal castle, but the reality of castle living is that they have tiny, cold rooms and loads of stairs. Our room had no hot water at all, which was not awesome. Visit this place for tea, but don’t spend the night.

In conclusion, taking a road trip was a nice change of pace for us after almost two months of plane travel. I thought that it was a really good way to see different parts of the country. It was a shame that we ended up taking this roadtrip in the winter and in the midst of a pandemic. I told Daniel that someday we will need to re-do our experience when the weather is warmer and things are open.