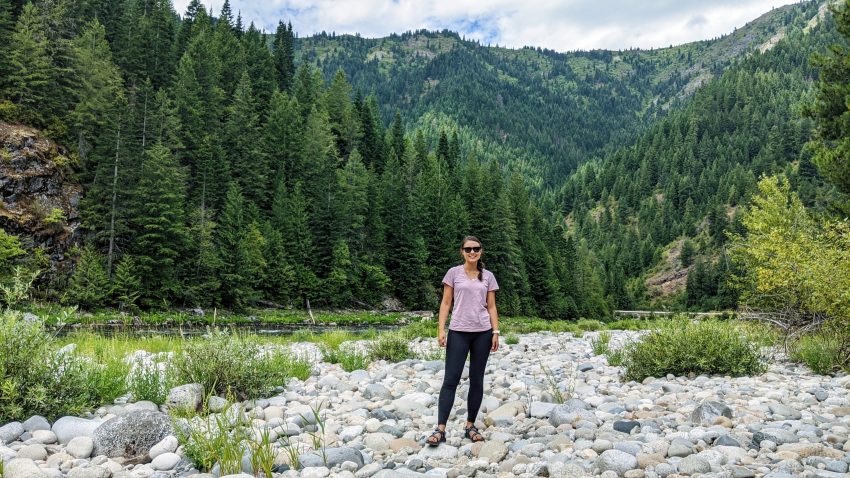 With our car in a shop, Daniel and I took a rental into Yellowstone. I’d never visited the park before, and I was excited to see it. I was surprised at how large Yellowstone is. Just driving around it would take four or five hours. As we neared the park entrance the sparse Wyoming landscape becomes more forested so that by the time you’re inside you’re driving through forest. In Yellowstone, we saw lots of bison, deer, and other animals wandering on either side of the road, and traffic would often stop to let some big animal cross the road.

Yellowstone has a beautiful landscape, with lots of big pine trees and mountains, but the really unique aspect of the park is all of the thermal activity. There are lots of steaming hot springs, bubbling mud pits, and geysers. Some of these looked pretty, like the deep blue hot springs, and others, like the bubbling mud pits that smell like sulphur, look like something out of hell. Daniel and I spent a lot of time hiking out to see different hot springs and geysers.

We also went to see Old Faithful, which is probably the most popular attraction in the park. At the geyser site we sat in rows of benches around a boring-looking dirt hill and waited. Though the Old Faithful is very regular, there’s still a thirty-minute window during which it’s expected to spout. I was afraid that I’d turn around and miss it, but Old Faithful spouts for a good five minutes, and the crowd screams the entire time, so I didn’t need to worry. At its height, the water from the geyser gets up about a hundred feet into the air.

Daniel and I were only in Yellowstone for two days. (We’d planned for longer, but then our car trouble upset our plans.) I think you could easily spend a week in the park, and hopefully someday Daniel and I can come back because there were lots of things we didn’t get a chance to see and do.

After Yellowstone we continued west across Montana. Montana has a very similar landscape to Wyoming: lots of hills, grass, and shrubby bushes. We saw lots of cows, sheep, and goats in Montana. After Montana we headed into Idaho, stopping in the town of Elk City.

Elk City is a very small town in Idaho about the same latitude as the Oregon-Washington border. To my surprise this part of Idaho was very rocky and heavily forested. I’d always thought of Idaho as being flat, and full of Mormons and potatoes, but this area at least was mountainous and full of pine trees and Baptists.

The town had a population of 200 and was out in the middle of nowhere. It’s a two hour drive through the wilderness to the next largest town, Kooskia, which has 600 people, and at least three hours from cell reception. It’s almost five hours to the next really big city, which is Missoula, Montana. The town has a saying that they like to put on t-shirts and local buildings: “End of  the world -> 9 miles, Elk City -> 12 miles.” I cannot describe how isolated this place was.

Apparently there used to be a timber mill in the area, but it closed a few decades ago. Now the people living in the area work for the forest service (the area surrounding Elk City is National Forest), or are retired timber workers. Most of the homes in town look homemade, and lots of people live in log cabins. There is a small school, a (surprisingly good) grocery store, a single restaurant/bar/VFW, a church, a tiny library that is open several hours a week, and a little grass airfield that the locals take turns mowing.

The cabin Daniel and I rented was fifteen minutes down a dirt road from the center of town. Our cabin’s water came from a spring, and we were warned against using too much, as the spring only produced a small amount of water every day. While there was internet, it was delivered via satellite and had a weekly data limit of 2GB (for reference an hour of HD video is about 1 GB). This was sort of a problem because Daniel had started job hunting, and trying to do a video interview over satellite internet was rough.

I like rural places, but Elk City was a little too remote for me. It’s kind of scary to know that if anything were to happen (break your leg, car breaks down, heart attack) you’d have a heck of a time getting help. Honestly, it was unnerving to be so isolated. It didn’t help that while we were there I was reading Annihilation, a book about eerie happenings in a remote natural environment. (It was a good book, but it creeped me out so badly I couldn’t sleep. Don’t read it while camping.)

Elk City is high up in the mountains, and it was cold at night. In the winter it supposedly gets down to -40. As for things to do in the area, you better love the outdoors or come with lots of books to read. There aren’t exactly hiking trails in the area, but if you want to head into the forest no one would stop you. Other than that, you can wade through the rivers–there are several in the area, and none were very deep.

Daniel and I spent an afternoon panning for gold. Elk City was a site of a gold rush back in the 1860’s, and lots of people still prospect in the warmer months. Daniel and I found nothing but pebbles. It probably didn’t help that we were using literal pie pans we’d found in a cupboard and had to read an article on how to use them.

All in all, Elk City was interesting, but not my favorite. It is a beautiful area but is very, very isolated. I came away wondering about what it would be like to live there full time, so far away from the rest of civilization. I can’t imagine growing up in a place like that. I will say that you would probably become a very handy person, because there would be no repair men coming to fix your problems. You would also probably have a much stronger sense of community. Everyone in town knew each other (and knew that Daniel and I were visitors), and everyone was especially friendly. Who knows, maybe it would be a really nice life. It would certainly be different from what most people are used to.

1 thought on “Rocky Mountains: Yellowstone and the Idaho Wilderness”