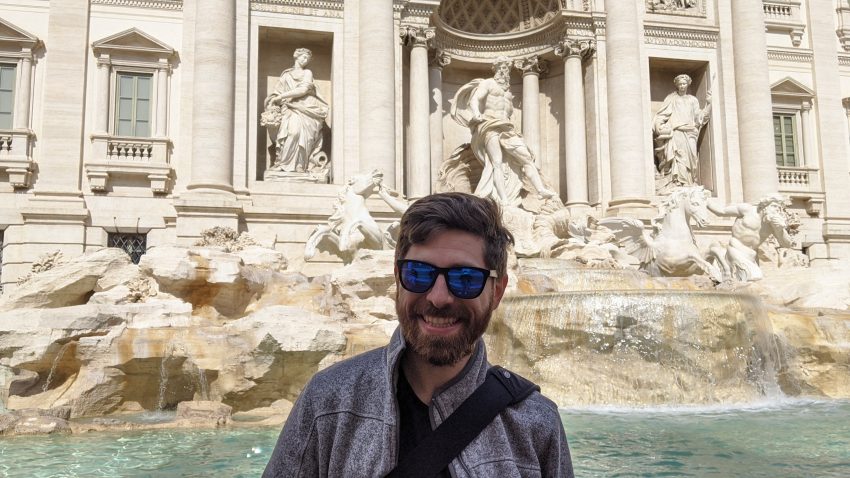 As you may have noticed from our “Where Are They Now” page, we are currently supposed to be in Rome. You may also have seen on the news that all of Italy has been placed under quarantine to limit the spread of Coronavirus until April or later. For those of you who have been texting us and expressing concern, yes, we were in Rome, but no, we’re not in Italy any more.

For some background, when Daniel and I booked our flight to Rome we were in Porto, and it was before Italy had any cases of Coronavirus. We’d been keeping tabs on the news, but honestly we weren’t too worried. It wasn’t until we were in Morocco that we started to hear about how serious the situation was getting in Italy. We debated canceling our travel plans, but the circumstances seemed to be changing so rapidly that we weren’t sure what it would look like when we were due to fly in.

Originally we’d planned to spend ten days in Rome and then take the train to Venice. I was pretty excited to visit Italy; we’d visited Rome before on our honeymoon and the crowding had been crazy. I was hoping that with less people willing to travel to Italy we’d be able to see the sights without fighting the crowds. We flew from Marseilles, France to Rome on March 8. On that same day several of the northern provinces in Italy were declared as locked down under quarantine, which included Venice, so we scrapped that part of our travel plan.

Daniel and I were staying in an absolutely beautiful, huge AirBnB near the Vatican. We both agreed that it was easily the best place we’d rented so far. We flew in in the evening, and after scoping out the apartment we walked to the grocery store for food and supplies. The store was packed, and we realized that every third person or so was “stockpiling.” People had grocery carts filled totally to the brim with dozens of cans of soup, packages of dried pasta, bottles of water, etc. It was sort of scary, like these people were preparing for the end of the world while we were just picking up coffee and paper towels.

However, when we ventured out into the city the next day things mostly seemed fine. The Vatican Museums and the Colosseum were closed; but we still saw plenty of tourists and tour groups, and the line for St Peter’s Basilica was so long it circled the square. There were security guards trying to keep people from standing too close to each other, and a few people were wearing masks, but mostly the city seemed to be full of families on vacation. It was much less crowded than I remembered it being on our previous visit, but it wasn’t a ghost town by any means.

Daniel and I walked around, saw the outside of the Parthenon (inside was closed), visited Trevi Fountain, and saw some very pretty churches that were still open to visitors. We ate at our favorite restaurant in Rome, Elle Effe, which we’d discovered during our honeymoon. We bought some pastries, we went back to the apartment and Daniel cooked pork chops. It was a nice day and the city really didn’t seem particularly stressed or on edge.

Anyways, I was on my computer at around 10:30 pm (writing a post for this blog actually) when my mom texted me to tell me that all of Italy had been put under quarantine. I Googled it, and it was true: in a little over 24 hours the quarantine had been extended from just the northern provinces to the entire country and was to be maintained until April 3.

Daniel and I had no idea what that meant. Did that mean that we just couldn’t take public transit? Because that wouldn’t be so bad. Or did that mean we couldn’t leave the house or country until the 3rd of April? Because that would be horrible. Would taxis still run? Were planes still leaving? Surely as non-citizens we couldn’t be held there, right? There was no concrete information online. The news had broken only fifteen minutes before I don’t think anyone knew what the real ramifications were at that point.

We called the American Embassy.
“What does this mean and what should we do?!” we asked.
“Look,” said the man on the after-hours hotline, “I don’t know anything more than you do. You should call back during business hours and maybe we’ll have some answers then.”

By then it was nearly midnight. Our biggest fear was that planes would either be kept from leaving the country or that the airlines would stop running out of Italy of their own volition. We didn’t want to be stuck in a country for a month where we didn’t speak the language and could only leave the apartment to get groceries. We also, you know, didn’t want to catch coronavirus and die, or transmit it to someone else, but that was a secondary fear.

So we made the decision to buy the tickets on the first flight outta there. In our case, it was an early morning flight to London Stansted from the Ciampino airport. We hoped that by acting fast enough we’d both beat other fleeing travelers to the outbound seats that were about to get very scarce and expensive, and hopefully get out before any airlines stopped service. We packed in record time, left the best AirBnB ever, called an Uber, and got to the airport around 1 am.

The airport was closed and wouldn’t open until 4 am–something we’d considered as a possibility. We could have waited in our apartment until closer to boarding time, but we didn’t feel like we were going to get much sleep anyways, and we didn’t know if it would become difficult to travel to the airport as news of the quarantine spread. We were in good company, there were probably fifty or more other people also waiting outside of the airport with their luggage. It was cold. I was wearing my pajamas and two jackets and I thought I was going to freeze to death. People jogged in place, did lunges, walked circles– anything to stay warm. The mood was actually pretty cherry, folks were worried but staying positive. After three miserable hours we got inside and lined up to check in.

To our surprise and relief, our flight was not cancelled (others were), and we were let through with very little issue at all. We boarded and fell asleep pretty much instantly. When we got into London there were also surprisingly few security measures. We’d needed to have our temperature checked to enter Rome, but not for London–we didn’t even need to have someone check our passport, it was entirely automated. Basically London let a plane full of people leaving quarantined Italy just walk into their city, which was both confusing and convenient.

Anyways, all this is to say we got out of Italy and we’re in England now. We were only in Italy for one day, but at least it was a really good day? We probably would have been fine if we’d stayed, but it’s nice to know that if more countries lockdown travel that we’d be stuck somewhere where we spoke the language. As of today, Italy hasn’t made any move to bar travelers from exiting the country, but several airlines have stopped or reduced service from the country entirely, and certain countries are not accepting travelers coming from Italy. So we’re glad we got out while the getting was good. And, if anyone has any suggestions for what to see or do in the UK, feel free to let me know! We didn’t expect to be here, so right now we have no plans.

P.S. There’s still more I plan to write about Morocco, but we’re posting this now so that people don’t worry about us.

6 thoughts on “Rome in the Time of Coronavirus: seeing the sights, fleeing the country”