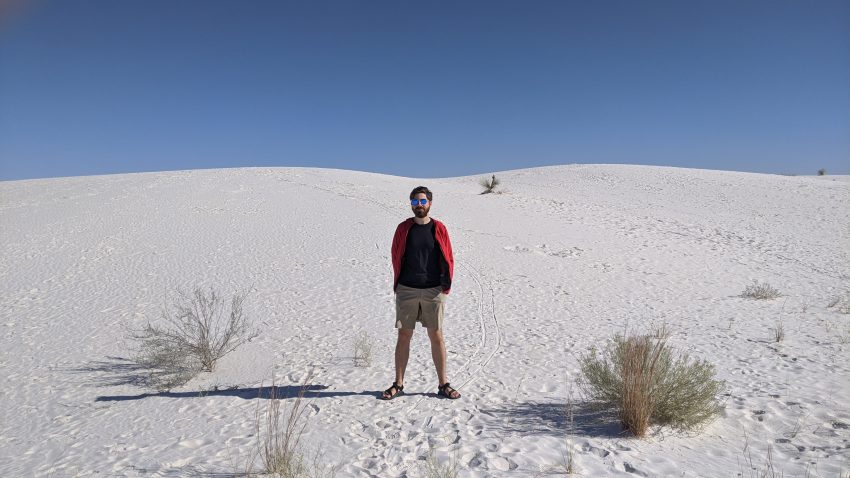 After spending a couple of days in Dallas with Daniel’s parents, we drove to San Antonio for a few days. Daniel lived in San Antonio for five years while he worked for USAA after college, and he was excited to show me the city. One thing I’d noticed about San Antonio is that everyone I’ve ever met who lives/lived there loves the place. I’ve never heard anyone who doesn’t like it there. This is a pretty big difference from San Francisco, where even the long-time locals can rattle off a long list of the area’s drawbacks. Needless to say, I was looking forward to finally visiting.

My first impression was that San Antonio was a much bigger city than I’d expected. For some reason I had thought that it would be quite a bit smaller. But San Antonio has a population of 1.5 million, making it slightly less than twice the population of San Francisco. It has the infrastructure of a large city too, with the large, twisting highways and overpasses that are so common in Texan cities, and a downtown that looks like a baby Chicago. It felt huge, and was not what I had imagined at all.

It made me think about how differently Daniel and I grew up. Daniel was born and raised in the suburbs of Dallas, where people refer to location using the language of freeway intersections. I grew up in a town with a population of 14,000. The only freeway passing through was two lanes each direction, and out where my parents live people use the names of the orchard’s owners to designate location. (People say things like, “it’s just past the Vanderkars, over by Old Man Joe’s place.”)

When Daniel and I met in the Bay Area I was living in the biggest city I’d ever lived in, and Daniel was living in the smallest. When I first saw San Francisco it may as well have been Hong Kong or Tokyo with how dense and crowded it seemed to me. I guess I assumed that Daniel saw it that way too; then I saw San Antonio, which he had described as a “cute little city” and I realized how off base I was.

Anyways, the first thing we saw in San Antonio was the Alamo. My high school history class had covered the battle of the Alamo in passing, but it wasn’t emphasized and I didn’t remember many of the details. I’ve discovered that in the Texas local school system students spend three years just on Texan history, so anyone who grew up there knows all about the Alamo. (I think it also explains why Texans are so crazy about Texas: they’ve been brainwashed. Texans feel the same way about their state as Catholics feel about the Vatican, it’s almost a religious affiliation.)

The Alamo is not large. I was expecting something like a California Mission, but it was far smaller. I think it’s worth seeing if you find yourself in San Antonio, but you can see the entire building and the grounds in a leisurely half an hour.

We also saw the Riverwalk in downtown San Antonio, which is a set of walkways full of shops and restaurants that follow the San Antonio River across the downtown. It was nice to walk along the water, as the weather was still hot and humid. I’ve been told that Texas autumns are late and short.

Daniel was most excited about the food in San Antonio. He introduced me to Puffy Tacos, which are tacos with deep fried, bubbly shells, and a bunch of other restaurants that he remembered from when he had lived in the area.

On the way into the city he’d brought me to a small gas-station stand called the Czech Stop, which sells kolaches–a sort of soft filled bun that can either be sweet or savory. Southern Texas had a wave of central European settlers including Czechs and Germans. Many of the towns of central Texas, such as New Braunfels, Fredericksburg, and Weimar, still have sizable european populations.

In San Antonio Daniel also drove me around to all the apartment complexes he’d lived in, and showed me the oak tree he’d hit and totaled his car on (it still has an area without bark from the impact.)

After San Antonio Daniel and I headed west back through the Southwest towards California again. Having done this drive going the other direction just a couple of months before, neither of us was really looking forward to it. It’s a shame that the part of the country between my parents and Daniel’s is so desolate.

As we left the state, I saw the Texas hill country for the first time. The hill country is an area of small rolling hills covered with short shrubby trees. It’s a pretty area, but there really isn’t much out there.

We spent a night in El Paso, a fairly large city on the Mexican border. While I have seen the San Diego border, this was my first time seeing the Texas wall which got so much media attention last election cycle. What I hadn’t realized is that the border wall is made up of slats, so you can see through it. As you drive on the El Paso highway you can look across the border to the cars driving on the Mexican freeway just beyond the wall. It’s strange to see them so close up and know that it’s a different country. The city on the Mexican side, Ciudad Juárez, is also a large industrial city, and in a lot of ways it’s like a single big city with a wall that happens to be running down the middle of it.

The next day Daniel and I headed out into New Mexico. This time around, we stopped in White Sands, a national park known for its (what else) white sand. The sand is pure white, like powdered sugar, and very fine and soft. Unlike beach sands, which are mostly silica, the dunes at White Sands are made up of gypsum — the remnants of an ancient sea that used to cover the area. The park is pretty small, and most of the attraction is just trekking through the big soft dunes. We visited on a clear day, and the reflection off of the ground was almost blindingly bright.

As we continued through the New Mexican emptiness we came across an area where there were several giant structures that looked like satellite dishes pointed at the sky. A sign on the side of the road identified it as the Very Large Array. I recognized it from the movie Contact, where Jodie Foster’s character, who works for SETI, picks up signs of alien life on the array. Some googling revealed that the satellite dishes are actually very powerful radio telescopes and, while they are not officially used by SETI, they are used for astronomical observations.

On our way through the state we also saw signs for the town of Truth or Consequences, which famously named itself after an old game show. We’ve seen a lot of strange names on the road (Walla Walla, Washington, Arkansas City–which is in Kansas, Okay, Oklahoma, Peanut, California, Surprise, Arizona, etc) but Truth or Consequences might be the best.

After crossing into Arizona, Daniel and I spent the night in Flagstaff. This is a prettier part of the Southwest: there are big trees, more mountains, and a lot more people. I think that the town itself is pretty cute; I would live in Flagstaff if I had to live in Arizona. Mostly however, I would try not to live in Arizona.

One of the reasons we stayed in Flagstaff was its proximity to the Grand Canyon. After missing it on our first drive through the state (hours were very limited then) I wanted to be sure to see it on our second trip. Daniel hadn’t visited the Grand Canyon since he was very young, and he was excited to see it. It’s very pretty and impressive, considering that it was eroded over the course of 70 million years.

West of the Grand Canyon and back towards the SoCal coast there isn’t much to see or do. (Although if you are heading that way and have the time, I’d suggest seeing Death Valley National Park, assuming it isn’t during the summer.) There are a succession of dusty mining and military towns: Barstow, Kingman, Baker, etc. It’s not my favorite area of the state and there isn’t much going on either with regards to the landscape or the infrastructure.

My only suggestion for this area is to visit Charlie Brown Farms, a souvenir shop and restaurant out in the middle of nowhere, an hour past Barstow. It sells a little bit of everything: lots of ugly and odd knicknacks, a huge variety of candy, exotic meats (alligator, elk, eel, etc), barbeque, and milkshakes. I recommend getting the date milkshake and then walking around for the next hour looking at all of the strange junk the owners have amassed over the years.

If you’re driving through that part of the world you know you’re getting back into civilization when you start to see the orange groves. And along with the citrus orchards you begin to see another Southern California phenomena: the side-of-the-road fruit stands. Usually adorned with plywood signs painted in cramped letters, you can get all kinds of fruit and flowers from these roadside stands and it’s usually much riper than grocery store produce. After three days going through the lonely and dusty Southwest, they were a welcome sight.

1 thought on “San Antonio and Back Through the Southwest”