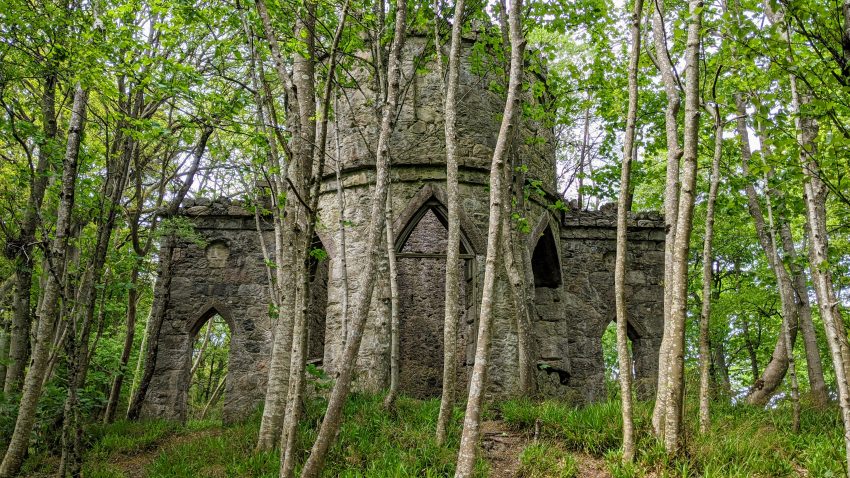 For the past two and a half weeks Daniel and I have been staying in a small Scottish village halfway between the cities of Aberdeen and Dundee on the eastern coast. As in England, we are in a fairly remote farmhouse, though in this location we’re actually close enough to walk to a town, which was not true at our last rental. Scotland, like England, is still fairly locked down (Scotland actually has stricter restrictions), so we’ve mostly been bumming around the house and going on hikes.

We’re about four hours north of our last location in England, and it is significantly colder here. Our first day in Scotland it rained, snowed, and hailed. I was definitely not expecting to have snow in May, but luckily the weather has warmed up quite a bit since then. Even the “warm” days are not exactly nice by California standards, and we haven’t had a day where the high broke the mid 60s, but all of the locals are out and about in shorts and tank tops eating ice cream, so it looks like summer even if it doesn’t feel like it.

Daniel and I looked up where our equivalent latitude would be on the North American continent, and we are farther north than every big Canadian city I’ve ever heard of. It’s the part of the map where there are no names–deep into the cold and unpopulated part of Canada. One of the perks of this is that the days here are really, really long. It doesn’t get dark until about eleven at night, and it gets light around four in the morning. I’d hate to be here in the winter when the inverse happens, but right now it’s nice. It’s essentially always light outside.

There are no sheep here (which I’m sad about), but there are deer, hedgehogs, and the biggest wild rabbits I’ve ever seen. One side of our farmhouse faces a patch of woods, where lots of people walk their dogs, and the other three sides are surrounded by fields of rapeseed. The rapeseed blooms bright yellow, which looks very striking. Also in bloom are lots of huge gorse bushes, a type of plant that grows wild in Scotland, which have deep yellow flowers. Driving down farm roads you see hills that are patchworked in green and yellow from the grass and the rapeseed. It’s very picturesque; it looks like something from a fairy tale movie.

While we no longer have sheep coming up to our back door like we did in England, we did have an incident where two peacocks from the farm next door came over. Daniel made the mistake of feeding them some bread, and they decided to stick around. For two days they would sit outside the sliding glass kitchen door, begging for bread and tapping the glass with their beaks. It cumulated when they flew up onto our chimney and started calling noisily into the night. If you’ve never heard a peacock call, know that they are extremely loud and sound like “YEEE-aaAAHHH-AHHH-AHHH.” There’s no way to sleep through that.

In the end, the farmer from down the road came over with his wife, both in their bathrobes, and tried to shoo them back to their farm. It was a bit of a fiasco. Imagine a Scottish man in his pajamas trying to get an angry peacock off of the roof at ten in the evening. They were successful in the end, and came over the next day to let us know they put a mirror in their yard in an effort to keep their birds occupied.

Other than the patch of woods directly in front of our house, Daniel will often walk a mile or so to hike along the North Esk River which has several trails running along its banks. The river has a stony bed and is full of giant salmon. We always see people in swimsuits playing in the water, but I can’t imagine swimming in water that cold. It’s a beautiful place to hike, the ground is so deeply covered with fallen leaves and moss that it almost feels spongy underfoot, and the landscape is all big trees and stony banks.

Outside of hiking, Daniel and I have been playing lots of pool. Our farmhouse has a detached barn/garage with a ping-pong table, dart board, and pool table. Daniel taught me how to play pool, and we’ve been playing quite a bit. I beat him for the first time recently, though that isn’t saying much because we’re both pretty awful players.

Daniel has been keeping himself busy by getting really into cooking. In San Francisco he really only cooked once a week, but now he’s been grilling burgers, making lasagna, cooking salmon, baking shortbread, etc. I have no complaints.

Other than the beautiful scenery and easy access to hiking trails, my favorite thing about our current rental is that, for the first time since our trip started, we have a dryer. I knew when we left America that most people in Europe line-dried their clothing, and after going through that process for five months I can confidently say that line-drying clothes is horrible. I was open-minded in the beginning, but once you’ve had to hunt down your underwear from where it’s blown off the line into the sheep pasture next door, save your laundry from the rain, or had to run a fan pointed at an indoor clothes line for eight hours because it’s pouring outside and your clothes won’t dry otherwise, you come to realize just how terrible it is. Here, for the first time in six months, I was able to run the sheets through the dryer and get in bed to toasty warm linens, and I never want to go back to the caveman-esq world of clothes lines.