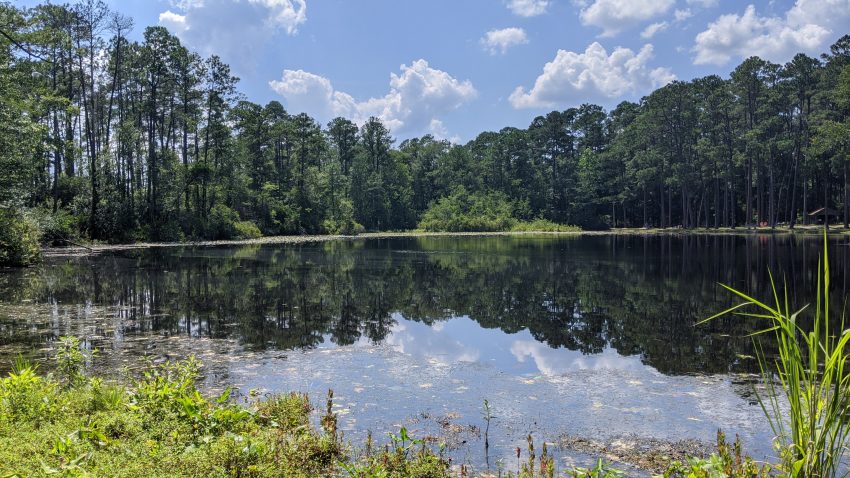 Daniel and I were in South Carolina for about two weeks. Here are some of the places we went and some of the things we did and saw:

After a week on the road going from hotel room to hotel room we decided to get an AirBnB in Aiken, South Carolina for a few days to take a break. Aiken is a city of around thirty thousand just across the border from Augusta, Georgia. It’s a quiet suburb surrounded by lots of farmland and woods. Honestly, Daniel and I found it a little too quiet; there wasn’t very much to do.

We did go to the Aiken State Park, which is a big wooded area with a river and several small lakes. Lots of people were out fishing and paddling up and down the river. Had it not been so unbearably hot, it would have been a good place for hiking.

One interesting thing I learned is that the largest employer in Aiken is the Savannah River Site, a nuclear reservation owned by the Department of Energy. This was also the site of the MOX project, which was for turning weapons-grade plutonium into fuel as part of the US-Russia nuclear non-proliferation agreement. However, due to the expense the project was cancelled which was really bad news for Aiken, because now they have become the largest store of plutonium in the US with no immediate plans to get rid of it. The county and the state sued the federal government to try to get the project reinstated, but to no avail. This was a little bit surprising because Aiken and the surrounding area is pretty peaceful and boring–it’s not the sort of place you’d think a large plutonium store would be.

I was very excited to visit Charleston. Daniel and I have been before and it’s one of my favorite cities. There’s lots of Civil War history, old architecture, good food, pretty scenery, and a fun downtown area. Daniel and I walked down the waterfront and through the neighborhoods of old homes built in the “single house” style. Downtown there is the Slave Mart Museum, built in what used to be a slave auction house. There’s also the City Market, which has lots of small food and craft vendors and stretches several blocks.

Just outside of the city we visited the Charleston Tea Garden, which is owned by Bigelow. I love tea, so I really enjoyed this. (Daniel is the coffee person and I am the tea person in our marriage.) It is the only commercial tea farm in the Americas, as tea plants are apparently quite picky about their climate.

At the plantation they have a free tour showing all of the processing machinery in action, which is quite interesting. You can see the leaves being withered, crushed, oxidized (the length of oxidation determines if it’s a black, oolong, or green tea), dried, sifted, and packaged as they move along the machinery line. They also give you lots of tea samples and sell tins of tea leaves.

We also went to see the Magnolia Plantation and Gardens, which claim to be the oldest public garden in America. Originally this plantation grew rice, but over time the large garden became a destination and tourists would come up the river to see them. The gardens are large enough to spend an entire day wandering through. There’s a hedge maze, a camilla area, a “Bible garden” growing only plants mentioned in the Bible, several ponds and bridges, etc.

However, by far my favorite part was not the garden at all but the native animal petting zoo they had in a corner of the plantation. It’s a small area with several “local” animals that have been adopted from wildlife rescue organizations: there are several deer, goats, ducks, foxes, alligators, a group of prairie dogs, tortoises, pigs, and more. You can buy animal feed for a quarter out of a repurposed gum-ball machine and feed any animal you see. I got to live out my Disney-princess dreams and pet all the deer; Daniel’s favorite animals were the little screech owls.

Myrtle Beach reminded me quite a bit of Gulf Shores, Alabama. Like Gulf Shores, Myrtle Beach is another Southern beach resort town, complete with colorful beach homes, ice cream stands, and a shop on every corner selling beach towels and umbrellas. However, I’ve never seen a town as kitschy as Myrtle Beach. It’s like being at a Disneyland where the one and only ride is the ocean. There were at least fifteen mini golf courses, all with different themes: dinosaurs, cowboys, farm animals, etc. And it seems like every shop or restaurant has some gigantic statue on the roof of a cartoon animal, or a giant surfboard, or a full-sized fake lighthouse (saw a few of those.) The whole town is like being inside of a souvenir shop. It makes it a fun place to visit.

Daniel and I spent an afternoon at the beach. Despite being crazy with the sunblock, I am now far more tan than I have ever been before. Every time I look at myself in a mirror I’m surprised all over again with how tan I am.

The beach itself wasn’t very crowded, probably because we were there in the afternoon and the early crowd had already left. It wasn’t quite as nice as the beach at Gulf Shores, but it had the same warm Atlantic water and soft white sand.

Our time in South Carolina was spent at a slower pace than the previous parts of our road trip. We used it as a time to recoup and reset (i.e., washing our laundry and cooking real meals.) South Carolina is a beautiful green state, full of rivers and woods, and it was a good choice for a more in-depth visit.