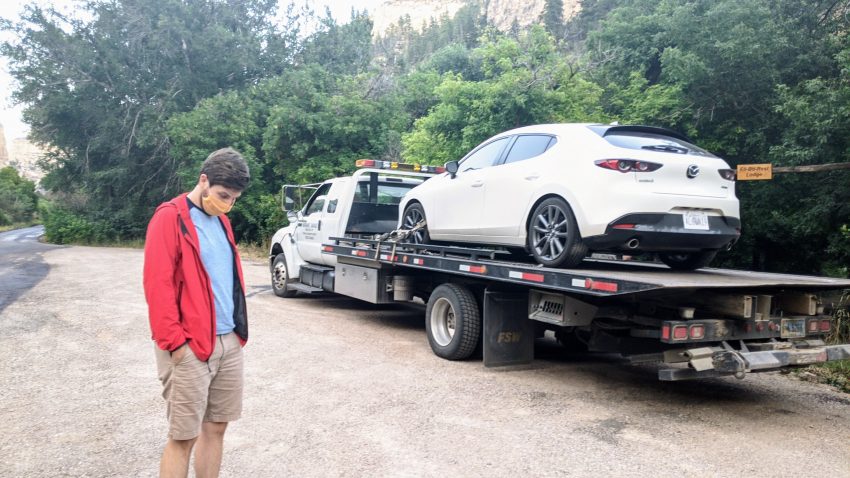 Leaving the Great Lakes area, Daniel and I kept heading west across the plain states.

South Dakota has the most monotonous landscape I’ve ever seen. It’s just flat farmland as far as the horizon for hours and hours. We saw fields of corn, alfalfa, sunflowers (which were at least sort of colorful), sugar beats, and nothing else for almost two days of driving. Towns were small and scattered, and we didn’t see a real grocery store until we reached Mount Rushmore. I have no idea what the people living in this area do for food, or why a major chain doesn’t move into this seemingly untapped market.

Something else that was strange was the prevalence of small casinos, which were often attached to gas stations. In California there are no mom-and-pop casinos, and they’re always on tribal land. South Dakota has no such restrictions, so you see all kinds of small shops with a couple of run-down slot machines advertising themselves as a casino. Honestly, I can think of no sadder way to spend your time than gambling at a South Dakota gas station. I understand it though–what else are you going to do if you live out there?

Just before Mount Rushmore, which is at the western edge of the state, the landscape suddenly changes from plains to big rocky mountains covered with pine trees.  It’s an abrupt transition, but the black hills area is very pretty and, after the flatness of the rest of South Dakota, a welcome change.

Daniel and I ate lunch at Mount Rushmore. I don’t have much to say about it other than it looks exactly like it does in pictures. As we ate we discussed who we would pick to be in “Twentieth Century Mount Rushmore.” I picked JFK, Teddy Roosevelt, Eisenhower, and Regan. Daniel’s were the same, but he picked Woodrow Wilson instead of Reagan.

Just beyond Mount Rushmore is the Wyoming border. Wyoming is a big, empty state (there’s only a half million people in the whole place). It’s not as green and flat as South Dakota, instead it has long stretches of dusty plains broken up by huge canyons and rocky plateaus. The rock formations reminded me of New Mexico. They are colorful and barren. It’s pretty in an eerie sort of way.

It was when we were winding our way through a steep canyon that disaster struck. Maybe a better way of phrasing it would be to say that we struck disaster? Anyways, we did the striking. We were going around a corner when we hit a rock that was sitting in the middle of the lane, and our car made a noise that you never want to hear your car make.

Daniel and I pulled off the first place we could find, and realized that all of our oil was leaking out. I’m not really sure “leaking” is a strong enough word–the oil was pouring out of our car in a thick stream and pooling up underneath it.

Then we realized how bad off we were. There was no cell reception. It was around seven in the evening, and we were out in the middle of nowhere. We didn’t see any other cars going in either direction. There was no shoulder to walk on–the sides of the road were the sheer rock walls of the canyon, and even if we had been able to walk somewhere, the nearest town was thirty miles away.

Daniel tried to convince me that we were going to have to wait until someone drove by and try to hitchhike with them into the next town. This terrified me. I’ve watched true crime documentaries. I’ve seen horror movies. I know what happens when you try to hitch a ride at night with a stranger in a desolate area. (They kill you. And maybe they torture you first.)

Daniel had just brought me around to this idea when, literally, a man emerged from the trees behind us. He was missing a couple of fingers and had the rugged look of someone who spends a lot of time outdoors. This guy ended up saving us. It turned out that he worked for the Wyoming Fish and Game Department, and he gave us a ride in a beat-up jeep down a hidden side road to the fish hatchery he worked at, unlocked it, and let us use the landline to call roadside assistance.

While Daniel made the phone call, the man, whose name was Bart, told me all about the Wyoming fishery business. Apparently fishing is a huge draw for tourism, so fisheries raise fish to stock the lakes and ponds for the fishing season. Pregnant fish are captured, and fishery employees “massage” out their eggs. (Bart told me that fishery workers are sometimes called “fish squeezers” because of this.) Then the eggs are incubated, hatched, and the baby fish are raised until they’re big enough to release into the wild. Wyoming tries to stock even the most remote little ponds, often dropping in the baby fish from a helicopter in harder-to-access areas. As stressful as it was to have our car break down, I’m glad I got to learn more about fisheries–it was really very interesting.

After calling for a tow truck, Bart drove us back to our car. The tow truck driver came and we rode with him in the cab of the truck for sixty miles to the nearest auto shop in the little town of Greybull. We spent the night in a cute little motel, and walked back to the auto shop the next morning when it opened, only to discover they don’t work on broken cars, only tires (?) and that we’d have to tow our car another thirty miles into the bigger town of Cody.

Cody has a little under ten thousand people, making it the biggest town we’d seen in Wyoming. As it is near one of the Yellowstone entrances, most of its business is around catering to park tourism. Cody is also where Kanye West owns a ranch and is building a 10,000 square-foot mansion. Every local we spoke to mentioned that Kanye had moved to Cody. People are very excited about it, mostly because there are high hopes that he’ll open some kind of sneaker factory, or otherwise bring more jobs to the area.

This is especially important to Wyoming because, as every local also mentioned, the state’s economy is terrible. Most of the money in Wyoming comes from oil, coal, or tourism. Oil prices are at an all time low, coal is a slowly dying industry, and tourism has been affected by the pandemic. Everyone we talked to seemed very stressed out about the economic situation.

In Cody we rented a car. It was a huge Suburban, the only car the rental company had left. The one thing Daniel and I did right on this trip was sign up for the fancy car insurance, so the cost of the rental and towing our car twice over ninety miles was fully covered.

While we waited for a real auto repair shop in Cody to take a look at the car, we took the rental car and headed off for the next leg of the journey.