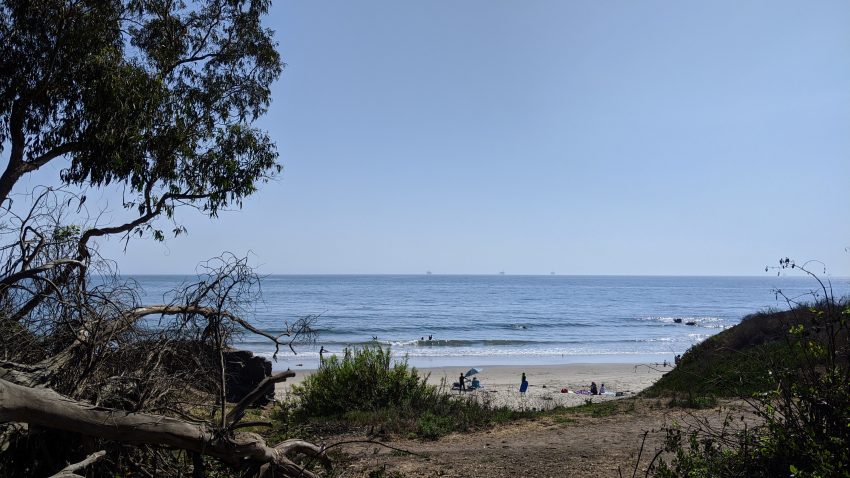 Once we left Seattle, Daniel and I rented a small house in Ventura, California for about three weeks. After nearly three months on the road it was really nice to stay in one place for a while. Ventura is only about thirty minutes from where my parents live, so we were able to spend time with them and with my little sister Vicky, who was still home for the summer from college. There isn’t much to write about, but here are some pictures from our time in Ventura:

This is a giant bowl of avocados my parents had on their kitchen table. Just before Daniel and I arrived my parents finished picking their avocado crop, so these fruit are some of those that were missed by the picking crew, fell from the tree, or grew around their house. Every year around this time my parents become avocado pushers and go around forcing bags of them on others because they’ll have way too many to eat on their own.

On the subject of avocados, during the first weekend of October my parent’s town holds its annual Avocado Festival. Although it was mostly canceled this year due to the pandemic, some events still took place, including this 10-pound-bag-of-avocado-holding competition that was featured on the front page of their local paper.

At my sister’s request, I bleached her hair. I was pretty dubious about the entire process and told her I wouldn’t be liable if all her hair fell out, but it came out better than expected. Maybe my sister’s hair doesn’t look quite salon-quality but for doing it late at night in pajamas and trash-bag smocks, it wasn’t half bad. Between this and cutting Daniel’s hair I feel like coronavirus is turning me into a hair stylist.

Daniel and I spent a lot of time walking along the beach. The campgrounds had been re-opened, so they were busier than they had been in June. Daniel is skipping a rock in this picture.

Red sun and hazy skies from the California wildfires. The smoke really wasn’t very bad where we were, but we did get a few days like this one.

Daniel bought this bike on Craigslist. The house were stayed at in Ventura was two blocks away from a nice bike path. I got my bike out of storage and we rode almost every day. I bought my bicycle right before we left San Francisco, but was so terrified of biking in SF traffic that I hardly used it. (My fear was not without reason: in the five years I worked downtown I witnessed two bikers get hit by cars in the three blocks between my BART stop and my office.) The bike path in Ventura was paved, pretty flat, and felt much safer, so I finally got more aquatinted with my bike.

This is part of the yard at the house we rented. I thought the backyard was really cute — there was lots of outdoor seating.

We also found out that the house we rented had a valley carpenter bee colony living in their eves. The bees are as long as your thumb, chew through wood, and buzz very loudly. Supposedly they are fairly docile, but their huge size makes them terrifying. The AirBnb owner sent over an exterminator who sprayed their nest, because docile or not they can cause a lot of damage chewing your home.

What Daniel and I didn’t know was that the bees would scream to death. Whatever poison the exterminator used didn’t act immediately, and as the bees returned to their home and it took hold, they would give out this long, high-pitched buzzing like they were being tortured. (Which I guess they were.) It sounded just like little bee screams, went on for hours, and was so loud we could hear it from inside the house. It did make me feel a little guilty for telling the owner about the nest–I didn’t realize they would be suffering as they died.

My parents took a trip for a week and Daniel and I went over to their place every day to feed their animals. This is Chester climbing an avocado tree.

This is Daniel with my parent’s chicken. (They used to have quite a few chickens, but bobcats and hawks have picked them off and this is the last one.) This summer Daniel discovered that he really likes chickens and let me know that he wants to get some of his own whenever we settle down. I found this ironic as he dislikes eggs.

One last picture of the beach.

2 thoughts on “Southern California in Pictures”