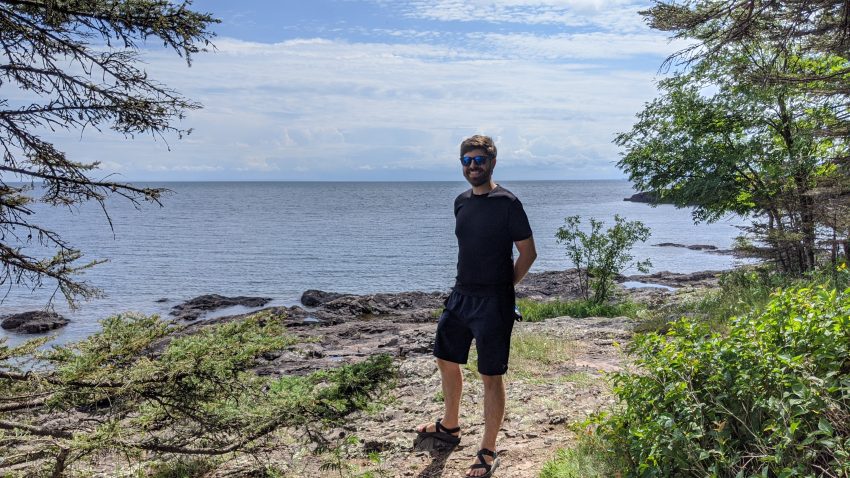 After going up the east coast Daniel and I turned west and headed to the Great Lakes. Other than out the window of an airplane, I’d never seen the lakes, so I was excited for this part of our trip.

The drive from Boston to Erie was long but beautiful. We drove through upstate New York, New Hampshire, and Vermont. The mountains covered with evergreen trees were amazing.

Erie, Pennsylvania is a city of about a hundred thousand people in the single corner of Pennsylvania that borders the Great Lakes. Like many Rust Belt cities, the population and economy in Erie are contracting with the loss of manufacturing jobs. When you drive through this is evident: the neighborhoods are filled with small 50s-style homes which gives the whole town a dated feeling.

The thing to do in Erie this time of year is to visit the Presque Isle State Park, which is on a peninsula that sticks out into Lake Erie. The park has nice walking trails, a lighthouse, and a long stretch of beach.

What I discovered is that beaches in the Great Lakes aren’t really comparable to ocean beaches. For one, the lack of waves makes the beach itself much shorter. Daniel said that he thought the stillness of the water was creepy. (“It looks like the ocean, but it’s not moving!”) Also, since the lakes are freshwater, trees grow right up to the edge, and the sand has a lot of dirt mixed in. Regardless, people seem more than willing to go out with their towels and swimsuits and brave the cold, cold water. I guess if you live in that part of the country you’re used to the cold.

After Erie, Daniel and I drove up Michigan. The coasts of Michigan were full of visitors traveling to spend time at the lake, but the rest of the state was pretty empty.

We stopped one night in Bay City, which is on Lake Huron. Bay City is the singer Madonna’s hometown, though you can’t find any references to her in local businesses or public areas. Apparently this is an intentional omission. After Madonna referred to Bay City as “a little smelly town” during a TV interview, the Mayor and the locals were deeply offended and have yet to forgive her.

Crossing over to the Lake Michigan side of the state, we stopped Traverse City. Traverse City was packed–it seemed like the entire town was on the beach. This area of Michigan is known for growing sour cherries (the kind you use in baking), and producing wine. I had never even considered that wine grapes could grow in Michigan’s cold climate, but apparently there are quite a few vineyards in the area. Overall, I thought that Traverse City was a really cute town, full of old gingerbread-style homes and little shops.

The next day we crossed over to the Upper Peninsula of Michigan. (Why they decided to divide up the state this way instead of considering the upper bit part of Wisconsin is beyond me.)  The Upper Peninsula had a lot more tourists than the lower half of the state, and because of this we ended up spending the night in the little town of Norway–which sits right on the Wisconsin border and was the only place we found an empty motel.

(Let me pause here to say that when it comes to motels Daniel and I have seen it all, and not in a good way. If we had thought to bring recording equipment on this trip we could have filmed a horror documentary by now called Motels of America.)

Anyways, around Norway the population begins to thin out drastically. The roads become small and winding, the town becomes sparse. The people living in Norway seem to have leaned into the town’s name and there is a pretty strong Viking theme in the names of the parks and restaurants. (Even neater than “Norway” is the smaller town next door named Vulcan.)

As we got further and further into Wisconsin, the area got emptier and emptier. The land was heavily wooded and covered with lakes. In fact, Wisconsin is so full of lakes that the map looks like a piece of Swiss cheese with blue shining through the holes. Driving down the road you see a different lake practically every five miles. It also happens to be full of mosquitos and several other varieties of biting insects. You can walk across a parking lot and by the time you reach the other side you have five new bug bites.

Daniel and I stayed for a few days in a run-down cabin on a golf-course in the “census designated area” of Danbury. Honestly, there isn’t much in this part of the country. According to Wikipedia, Danbury’s one claim to fame is that it’s where the second-largest white-tail deer was ever shot. There’s lots of deer, lots of lakes, lots of trees, and few people around that area.

Danbury was where I got attacked by wasps. Unbeknownst to me, there was a huge paper nest on the underside of our cabin’s porch. I discovered this the hard way when I upset the hive by rocking over it in a rocking chair. This is how I learned that wasp stings really really hurt, and that they can sting you through long pants.

Daniel’s brother spent a couple of summers working at a girl’s summer camp in the area near Danbury, and on his recommendation Daniel rented a canoe and spent an afternoon paddling down one of the rivers. The water was cold, but we saw lots of people tubing. Honestly, if you live in this area you need to learn to love water-sports and/or hunting, because there’s nothing else to do around there.

In Wisconson Daniel and I ate cheese curds and also tried some pasties. Pasties are originally a Cornish food, and are sort of like a hand-pie filled with meat and root vegetables. They were introduced to the area when a bunch of Cornish miners immigrated to the area in the 1830s. Now that we’ve spent a few months in England I feel confident in saying that Wisconsin pasties do taste very British: they have the same bland heaviness as so many other English dishes. They taste like something you’d get at a hospital cafeteria and they are very filling.

Next, we went to Duluth. Duluth is a port city on Lake Superior with a population of around a hundred thousand. This time of year it’s a beautiful place to be, but the locals all warned us about the six month long winters. The city is built on a hill and, like San Francisco, there are several very steep streets. I asked one local woman how people drove on those roads in the winter and she said, “We try not to.”

The people in Duluth speak with the same northern accent that some Canadians have (lots of “ooo” and “aaah” noises), and everyone we met told us how the weather they were having was way too warm, even though the high was only in the low eighties.

Something I found interesting is that most of the buildings in the downtown are connected via bridges. They call this the “skywalk,” and it allows you to walk for blocks without having to go outside–something that is very important in the winter. The entrance of the skywalk is in a covered parking garage, so you can park there and then wander from office building to office building to get to your final destination.

In Duluth Daniel and I went to see the William A Irvin, an old ore hauling boat that has been retired and turned into a museum. I was honestly surprised to learn how large an industry shipping on the Great Lakes is, especially since they freeze over in the winter so there’s a few months of “off-season.”

The one thing that everyone recommended to us in Duluth was to head north from the city along Lake Superior’s shore. The scenery between Duluth and the Canadian border is very pretty this time of year. Daniel and I didn’t have the time to head all the way to the border (which is closed anyways), but we did head north to the city of Twin Harbors. Around this part of the state you start to see lots of signs for Minnesota wild rice, which is unique to the region. I bought and cooked some, and while it wasn’t bad I can’t say I noticed anything particularly special about it.

If you want to see the Great Lakes, now is definitely the time of year to do it. It’s a beautiful area, lots of woods full of big trees, colorful wildflowers, and rolling hills. The downside would be the bugs. There were more bugs than I’d ever seen. Every time we stopped for gas we’d spent five minutes trying to squeegee off all of the dead bugs from the windshield, but the minute we’d start to drive again we’d be back at square one. In some places we were massacring so many bugs that it sounded like rain.

I was also surprised at how many tourists were at the Lakes. Maybe it’s just because California is so far from them that I’d never thought to visit before, but I had no idea that part of our country was such a destination. However, now that I’ve seen that area for myself I understand the appeal. I’ve already told Daniel that we’ll have to come back some day and stay longer.