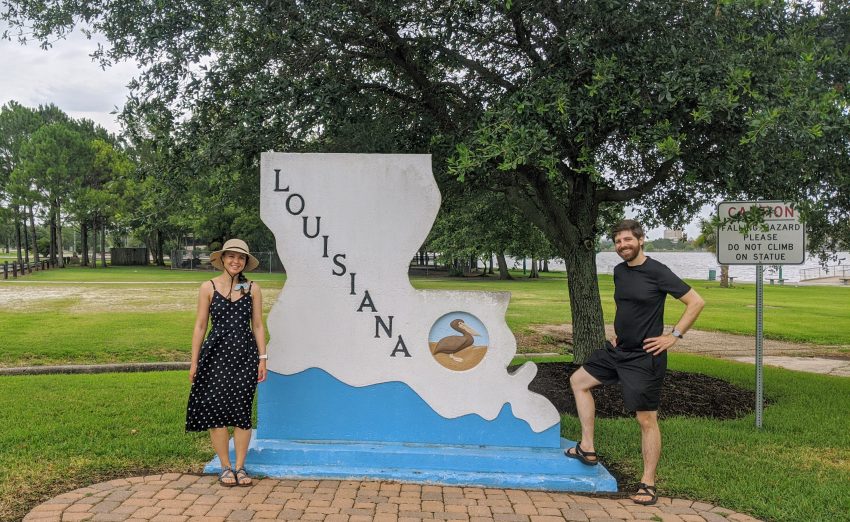 Daniel and I have had a longstanding discussion over whether or not Texas is considered “in the South”. According to him, Texas is a Southern state, but according to anyone who grew up outside of Texas, it clearly isn’t. No one drives through Amarillo and looks around at the tan plains and thinks it looks like a Southern landscape. However, Daniel insisted that “Texans” are a subset of “Southerners”.

This was an unsettled point of contention until it finally clicked for me as we were driving through Texas. Here is my conclusion: Most of Texas is clearly the Southwest. It shares the same hot, flat, rocky scenery as New Mexico. However, I now concede that the city of Dallas, and the small slice of the state to its east and south are “Southern.” Basically, if you draw a straight line between Dallas and San Antonio, everything to the right is in the South. This is because these parts of the state are noticeably greener and more humid.

Daniel was appeased by this classification because most of the people in Texas live in this area, and thus would be considered Southerners. Therefore, I’m going to consider our drive from Dallas to Atlanta as a trip through the South. (Still unresolved is the question of what states are considered the “Deep South”. Anyone have any ideas?)

Daniel and I stayed in Dallas a few days at his parent’s home. Most of the time was spent catching up with his family. We met Daniel’s sister’s new twin babies (both boys, two months old) for the first time. I was surprised at how different they looked and acted from each other. They’re fraternal, so I didn’t expect them to be totally similar, but I was still amazed at how clearly their personalities come through at such a young age. One is definitely the more active and “talkative” one, and the other is more reserved and relaxed. It will be interesting to see how much of that will remain true as they get older.

It was in Dallas that Daniel introduced me to Buc-ee’s, a gas station chain in the South. Each location has about one hundred different pumping stations, and the station store is the size of a supermarket and sells food, drinks, clothes, and just about every type of gas station snack you could possibly imagine. It was amazing.

On our last day in Dallas we picked up my littlest sister, Vicky, from the airport. She took a week off of her job at the burger stand to travel with us as we drove through the South.

With Vicky packed into the back seat with our luggage we headed to Austin. Neither she nor I had ever been before. I was surprised at how green the city was. The Colorado River runs through the middle of town and it was crowded with kayaks and paddle boards.

We walked by the Texas capitol building and then down 6th street, which is famous for its bar scene. With the pandemic the bars were only open for takeaway, and the street was pretty quiet as a result.

At twilight we went out to the Congress Avenue Bridge, which is a big cement bridge crossing the Colorado, and the home to the world’s largest urban bat colony. Around sunset every night all of the bats leave their hiding spaces and go out to hunt for bugs and it’s something of a tourist attraction to wait to see them. I expected a couple of hundred bats at the most, and was pretty shocked when hundreds of thousands of bats swarmed out for over a half an hour.

Daniel and I had wanted to visit Austin partially because so many tech companies have offices there. Several of my former coworkers have moved to Austin because the cost of living is so much lower than the Bay Area but with comparable job opportunities. However, after having visited I’m not sure I could ever live in that kind of heat and humidity. It’s a rough place to be in the summer months. On the other hand, Vicky decided that she loved Austin. She liked the city, she liked the river, and then Daniel introduced her to Texan BBQ and she decided that brisket is her new favorite food. So overall, it was a very successful visit for her.

After a long day on the road headed into Louisiana, we spent the night at a hotel in Lake Charles. There’s really not much to be said for this city. It’s small, without very much going on.

The one attraction in town is a casino named The Golden Nugget. With nothing better to do that evening we decided that we’d go check it out. This is how we discovered that, unlike in California where the gambling age is eighteen, it’s twenty-one in Louisiana. Vicky is eighteen, and I’m pretty sure the man checking our IDs thought that Daniel and I were trying to sneak her into the place. He threatened to “call the police and send us to jail,” so we ended up going back to the hotel and watching a movie.

The next morning we checked out the only other thing to see in town, a little fenced-in pond where they keep a couple of smallish alligators. It was okay.

As we drove further south through Louisiana the land got more and more swampy, and the vegetation got more and more jungle-like. We were driving on Interstate 10, and for long stretches the highway is lifted because the ground is so wet and so many rivers run under it. The foliage on either side of the road was so thick that it would have been impossible to walk though without cutting a path. It felt like we were in the Amazon rainforest.

On the way into New Orleans we stopped to visit the Oak Alley Plantation. In the antebellum era, this was a working sugar cane plantation, and in fact there are still fields of sugar cane grown in the surrounding area. (My dad pointed out to me that this is because the US heavily subsidizes domestic sugar.)

At Oak Alley we took a tour through the main house, which has been well preserved, and walked through the slave quarters, which have been re-built for visitors to see. There was a presentation on how sugar cane is harvested, and a large garden with several crepe myrtles–a flowering tree that’s common in the South.

When we reached New Orleans it was so hot and humid that it was pretty miserable to be outside. A five minute walk down the street leaves you sticky with sweat. There’s nothing to be done for it. You either get used to it, or you live your summer months in the comfort of air conditioning.

We braved the oppressive heat and mugginess and walked around downtown New Orleans, where there were lots of shops selling trinkets, voodoo paraphernalia, pecan pralines (so sweet), and restaurants offering various forms of deep fried seafood. Driving though the city there are neighborhoods full of big fancy southern-style homes as well as neighborhoods that are clearly lower-income and quite run-down. Over all, New Orleans struck me as a very disparate city, with lots of wealth and lots of poverty.

Vicky’s favorite part of New Orleans were the beignets, which she had never tried before.

After New Orleans we headed east through Mississippi to Gulf Shores, Alabama. I’d never heard of this city before, and we added it to our itinerary based on Vicky’s recommendation. One of her high school classmates had moved from Gulf Shores. Outside of the city we found a Buc-ee’s where Vicky discovered her love for beaver nuggets, which are basically Cheetos that have been given the caramel popcorn treatment instead of being covered in cheese.

Gulf Shores is a small town built around beach tourism. Because it’s sort of a long and skinny area along the gulf there are miles and miles of beachfront. Even though this city was absolutely packed with visitors when we arrived, the beaches still weren’t crowded just because there’s so much shore to spread out along.

The beach at Gulf Shores is really nice. The sand is white and soft, the water is warm (at least compared to California beaches), and the waves are mild. It’s also incredibly hot and humid this time of year, so getting into the water feels amazing. We spent a day at the beach. Despite our sunblock precautions I got pretty tan and Daniel got sunburnt.

Maybe my favorite part of Gulf Shores is how cute all of the houses are. All along the beach and main streets are easter-egg colored cottages that are lifted onto stilts to prevent flooding when hurricanes come through. They make the town look very cheerful. I like Southern architecture in general: the symmetrical homes with their large wrap-around porches, pitched roofs, and columns. The homes in Gulf Shores have many of these features, but are elevated and painted bright colors.

As you head northeast towards Atlanta the homes change from the wooden two-story Southern style back into low brick homes that you find in the Dallas area. I have no idea why bricks are seen as such a superior building material in so much of our country–the earthquake-wary Californian in me can’t help but view them as a hazard–but there’s a huge swath of America that seems to be filled with identical-looking brick houses. Frankly, I find it kind of boring. Bricks make every house the same tedious neutral color, but I am clearly in the minority opinion.

Atlanta is a big city that is infamous for having the worst traffic in America and the busiest airport. It started as a railway hub and has evolved into an airline hub.

We visited the city’s botanical garden, which was more interesting than I had expected. Unlike some botanical gardens that take a more natural, wild approach to their plants, the one in Atlanta is a formal, planned garden. Every season they have different topiary exhibits (they call them “plant mosaics”) and when we visited the theme was “Alice in Wonderland.” The garden also has the largest orchid collection on display in the US, and I dragged Daniel and Vicky into the orchid house to look at them with me.

Vicky flew back to California from the Atlanta Airport after a final meal of BBQ. It was fun having her along. Over the past year Daniel and I have spent a lot of time with just each other, and while it has its benefits it’s good to spend time with other people now and then.

1 thought on “The South: Dallas to Atlanta”