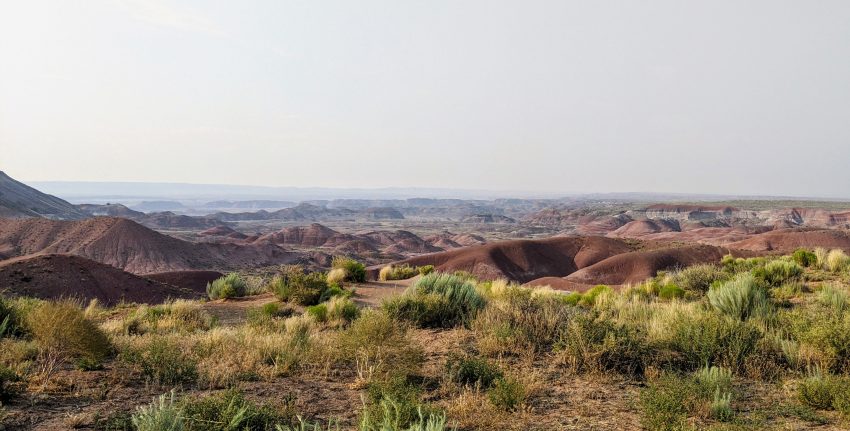 There is no good way to drive through the South during the summer. It’s hot, humid, and unpleasant the entire season. Daniel and I wanted to drive though the country in a large loop, but hadn’t decided on the direction of our route. If we were to go counterclockwise we would go through that part of the country in June, clockwise and we’d be hitting it in August.

Daniel, who has experience from growing up in hot and muggy Dallas, made the executive decision to go clockwise. He suggested we try to get through the lower half of the country earlier in the season, with the hope that it would be a little cooler. So, we left the pleasant sunshine of the Southern California coast and drove East through the Southwest. We aimed for Daniel’s parent’s home in Dallas where we planned to rest and regroup for a couple of days.

Daniel was pretty pessimistic about Southwest. He spent an hour or two poring dejectedly over the giant road atlas he’d insisted on buying. (He’d ignored my argument that, in the smartphone era, no one uses physical maps any more.“If you’re going to take a road trip you need a Rand McNally,” he’d insisted.)

“We should try to get through this area as fast as possible,” he told me before we set out. “There’s nothing to see in those square states but rocks”. So, McNally in hand, we planned out a few long days on the road.

We got a late start on our first day since the car’s wheels needed alignment. Once that was taken care of we got on the Interstate 40 and headed east towards the California border. There isn’t much to see in this stretch of the state. Away from the coast the scenery quickly gives way to a tan landscape punctuated only by dusty creosote bushes and dried-out tumbleweeds. The highway gets narrower and you see a lot more semi-trucks and a lot fewer locals on the road.

When we crossed the border just beyond Needles, a town that basically only exists to provide service for people driving though, it was already dark. We had planned to spend the night there, but Daniel was driving and he was feeling pretty good, so we drove another hour and found a hotel in Kingman, Arizona.

Daniel and I woke up early the next day and immediately got back on the road. Gas in Arizona is significantly cheaper than in California, but other than that there isn’t much that differentiates that part of the state from the area we’d driven though the previous day. Maybe a few less bushes and a few more rocks.

We’d wanted to visit the Grand Canyon which had just reopened its western rim. However, it was open with such limited hours that it turned out to be impossible to fit into our schedule. (We tried to see it and were just barely too late, which made me mega-sad.) As an alternative, we went through the Petrified Forest National Park instead, which I had never seen before.

The Petrified Forest is out in the middle of nowhere, in a section of the state that is very brown and very hot. It consists of a two-way road that winds through the park and has different points to pull over and see various features, the main one being, of course, the petrified wood. I was surprised at just how much petrified wood there was in the park. I expected a couple of small stumps, but the reality is that the area is littered all over with giant fossilized tree trunks. They date back to the Triassic period when the area was a humid forest.

The trunks are so big and long that the trees would have been really enormous when they were alive. Seeing so many huge tree remains out in the middle of the hot and barren desert was a little bit surreal; they seemed very out of place.

We also saw the Newspaper Rock, a big boulder etched with cave drawings, and the Tepees, a group of colorful pyramid-shaped rock formations.

Daniel and I were only in the Petrified Forest for an hour or two (we had to leave because it was closing), but I think that you could easily spend a full day there, especially if you visit when it isn’t so hot and it’s bearable to use the hiking paths.

Around the Petrified Forest National Park the landscape starts to get more interesting, with big reddish-purplish rock formations and mesas rising up on either side of the road. It’s the rocky geography that New Mexico is known for and a nice change from the rest of the flat Arizona scenery.

Daniel and I spent the night in Gallup, New Mexico. Gallup is infamous for having a crime rate almost three times the national average (over five times the average in 2012), making it more dangerous than 98.8% of cities in the country. It’s a mid-sized city, but has lots of grocery stores, restaurants, and hotels because it acts as the closest shopping for much of the nearby Navajo Nation and Hopi Reservation.

On the roads to and from Gallup you see many signs for “Navajo Trading Posts” that advertise “Authentic Fry Bread, Jewelry, and Pottery”. There were also several abandoned roadside stands for authentic Navajo food, shut down, I presume, due to the pandemic that is devastating their community.

Outside of Gallup Daniel and I stopped to see Church Rock, a beautiful cathedral-shaped rock formation in a little town of the same name. Church Rock was also the site of a massive uranium spill back in the 70s. At the time the local authorities were slow to communicate the dangers of the spill to the surrounding Navajo community, and the then-governor of New Mexico refused to declare the spill a federal disaster area which limited federal aid. As a result, the radiation contaminated the river which many Navajo drank from, sent several Navajo children to the hospital, and is thought to be linked to the persistent higher rates of cancer in the population living in the area even today. Pretty tragic stuff.

After Church Rock Daniel and I stopped in Old Town Albuquerque for lunch. We made sandwiches which we ate in a grassy square. It was very hot. The area was really cute and touristy with lots of Navajo and Mexican goods and food for sale. There were also many fresh, dried, canned, and decorative chile peppers for sale. The chile pepper is the state vegetable of New Mexico, which I learned that is home to the Chile Pepper Institute, the only international research organization that focuses on chilies.

Our last night in the Southwest was spent in Amarillo, Texas, in a run-down motel that smelled strongly of cigarettes, and even more strongly of some chemical-y air freshener that was used in an attempt to cover the cigarette smell.

There’s nothing around Amarillo. I’d driven through that part of Texas before and it was exactly as I remembered: hot, flat, brown, and empty. It’s so dead out there that the city’s name literally means “yellow” in Spanish. There aren’t even really any cows or crops. All there is are big wind turbines and an occasional abandoned grain elevator.

One thing that is kinda neat in that area is Cadillac Ranch, an odd piece of installation art consisting of ten old Cadillacs buried nose-down in a wheat field. People visit it to spray-paint the cars, which are now covered with a layer of paint so thick that they’ve lost definition and are on their way to becoming more paint than vehicle.

From Amarillo we cut southeast through the state towards Dallas. We stopped to see Palo Duro Canyon on our way out of Amarillo. It’s second in size to the Grand Canyon, so Daniel jokingly referred to it as the “Great Canyon.” Like the Grand Canyon it was technically open, but so restricted that we couldn’t actually enter the park. Luckily, with the Palo Duro Canyon you can just pull your car off the road outside of the park entrance and trek a couple of yards to the canyon’s edge, which is what we and several other cars did. The Palo Duro Canyon is formed by a branch of the Red River, which really is a vivid red color.

The geography gets a little bit more interesting between Amarillo and Dallas, but not by much. It’s still pretty flat, hot and brown. Now and then you cross an area where the grass is green and not brown, but the flat prairie landscape is pretty bleak.

Interestingly, before starting this trip I read an article in the Wall Street Journal where the author drove across the Southwest during the pandemic, just as we were planning to. With reference the the Texas geography he writes:

From Santa Fe, the rest of New Mexico rolled out attractively, mesa and range, looking like its postcards, right up to the state line when suddenly it becomes Texas, and all interest ceases. The land flattens out and loses geological appeal. From the Texas border to New Orleans was a 14-hour marathon interstate run with no place to stop.

In my experience, this is true. You can drive for an entire day across Texas without any break in the brown, flat scenery. And between Amarillo and Dallas there are basically no big cities. There are little towns here and there where the farmers who raise cattle or wheat in the surrounding land go to church and buy their groceries, but overall there is a very empty feeling in that area.

Daniel and I reached Dallas at the end of our fourth day of driving where Daniel’s parents and his sister’s family were waiting for us with dinner. We were glad to see them, glad to have a break from our endless stream of cereal and sandwiches we’d been eating, and glad to spend the night in a real home instead of a motel.

1 thought on “The Southwest: SoCal to Dallas”