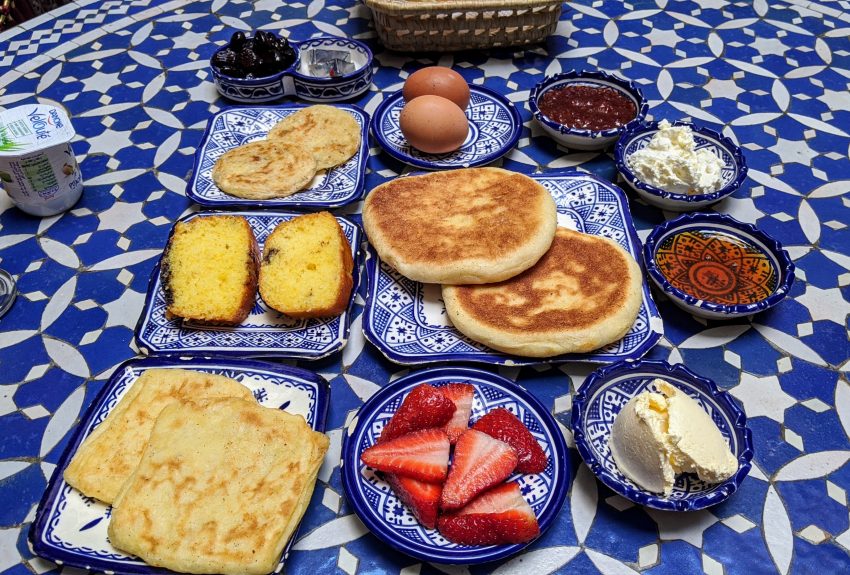 Unlike our previous destinations where we stayed in rented apartments and did a lot of our own cooking, in Morocco we were in a riad and ate out for every meal. Honestly, eating out that often was too much, and I am happy to be back to a routine where I have more control. (When I lived in San Francisco I knew lots of people who “didn’t cook,” and I have no idea how they did it.)

Anyways, for the ten days we were in Morocco we tried lots of foods that were new to me. Before this trip I’m not sure if I’d ever eaten Moroccan food or if I could have even named a Moroccan dish.

I will say that in the big cities there are definitely “tourist restaurants” and “local restaurants,” and the food and clientele are distinct between the two. In the main square of the Marrakech medina you find vendors selling pizza and chicken sandwiches, and the further you walk from it the more authentic the food gets until you find, like, some guy selling snail soup. In Marrakesh we did a food tour of the city where I ate lots of dishes that I would have never ever sought out on my own. Here are some of the things we ate in Morocco:

Moroccans eat bread with every meal. The traditional bread is a type called khubz, which is a leavened, disk-shaped loaf. You see these loaves everywhere, street stands will be selling huge stacks of them, locals will be carrying big bags of them home, and every meal will start off with a basket of bread. It’s usually whole wheat, but it can also be found as white bread or rye. Most of the loaves we ate were about ten inches across, but at a big group meal we would sometimes be served much larger loaves for sharing.

On our food tour we visited the community oven where these loaves are baked. In the past, before home kitchens had ovens of their own, it was common to bring your unbaked loaves to the community oven. Nowadays however, these community ovens mostly just make bread to sell to restaurants and hotels.

Both of the riads we stayed at in Marrakesh and Fez served a breakfast that varied slightly day to day. It seemed to me that the big theme in Moroccan breakfasts is carbs. Breakfast would often be three different types of bread, cake, and coffee. To Daniel this was perfection. If it were up to him he’d eat all bread all the time. He aspires to be a carbavore. (True story, early on in our relationship he told me that he “didn’t eat salad.” As someone from southern California I was like, “what?!” Six years later he eats salad occasionally.)

M’semmen
This is a square-shaped oily flatbread. They reminded me of Chinese scallion pancakes in that they are folded and cooked such that they separate into layers when you tear them. We had these plain for breakfast where we ate them with jam or honey, but they also make a savory version when tomato and garlic are added which is eaten without any toppings. The ones we had at breakfast were small, about four inches square, but street vendors sell larger ones about a foot across which you can buy for a dollar or less.

Beghrir (Thousand-Hole Crepe)
These are like pancakes, but they’re cooked without being flipped so one side is pockmarked with little holes. They’re softer and thinner than American pancakes, and good with jam. Apparently you can call someone a “Beghrir face” as an insult in Moroccan Arabic.

Harcha
When Daniel first saw these he was like, “look how huge the English muffins are here!” They do look like giant English muffins, but the texture is much denser. These are made out of semolina flour and have a coarse exterior. The name means something like “the rough thing”. You would eat these with butter, honey, or jam, like a pancake.

Sardine “Burgers”
These are small sandwiches you build from a piece of round bread, a olive and tomato salad (kinda like pico de gallo), and a grilled sardine patty. The crazy thing about these is that they do not taste like fish at all. We ate them on our food tour and the guide asked us to guess what the meat was. Our two guesses were lamb and beef; everyone was surprised to discover it was fish. The patties are made by deboning sardines, mashing them up with seasoning, and grilling them. They really do taste like little burgers.

Sheep’s Head
We ate this on our food tour. Our guide showed us the two-hundred year old pit oven used to slow cook the meat. I thought that this tasted pretty good. Daniel was pretty icked out.

Snail Soup
I was hesitant about this one. Again, we had this on our food tour–I don’t think I would have tried this on my own. Unlike the French, who sauté their snails in so much butter and herbs that you can’t taste much else, the Moroccan way to eat snails is to boil them. We had to use a toothpick to pierce them and pull them out of the shell. I ate a few of these. The had a strong earthy flavor, kinda like mushrooms. I’m not sure I’d eat snail soup again.

Couscous with Vegetables
This is sometimes described as the national dish of Morocco. I think we ate this three or four different times. Moroccan couscous is very fine, it’s not the larger pearl couscous you usually see in the US. Like many Moroccan dishes, this is cooked and served in a tagine, a type of clay pot for slow-cooking. This dish consists of a huge pile of couscous covered with steamed vegetables: eggplant, squash, carrot, cabbage, and zucchini. Quite frankly, I was not a fan of this. It was always bland and the vegetables are cooked until they are mush. On our food tour we even tried the “best couscous in Marrakech” and I still thought it was pretty meh.

Kefta Tagine
This dish is made of meatballs and eggs cooked in a tomato sauce. I liked this, it reminded me of eggs in purgatory, and I’m pretty sure I could easily recreate it.

Pastilla
Daniel’s new favorite dish! These are meat pies where the filling is wrapped in phyllo dough, which makes the exterior very flaky and crunchy. They can be made with any type of meat which is chopped or shredded and mixed with onion and seasoning. The top of the pie is dusted liberally with powdered sugar and cinnamon. It sounds very strange, but the sugar with the meat and onions is a better pairing than I would have thought.

Olives
We had olives served with every meal, including breakfast.  Olive vendors in the medinas sell many different types. Some are spicy, some are herby, some are very strong and some are pretty mild, but almost all have pits so be careful when you bite into one.

Berber Salads
In the same way Korean restaurants will serve banchan before a meal, at some Moroccan restaurants we were served an assortment of Berber salads as an appetizer. These are salads like potato salad is a salad–they are cooked and contain no greens. These salads can be made out of most any vegetable, which is cooked until it’s soft, then mashed, seasoned, and served at room temperature. I can’t even name all of the different kinds I tried, but I liked the ones made out of cauliflower and green peppers best.

Harira
This soup often served as the first course of a meal. It’s a mild tomato-based soup containing lentils, garbanzo beans, and sometimes rice or small noodles as well. Sweets are a traditional pairing with this soup, which sounds weird, but Moroccans are really into the sweet-and-savory combination. Harira tastes like thick, bland minestrone soup.

Oranges
Moroccans don’t really eat dessert in the Western sense of the word. The might serve some fruit after a meal, but they don’t do elaborate cakes, ice creams, etc. On our tour to the desert we stopped at a few restaurants that listed dessert on the menu where the “dessert” was handing everyone an orange and a knife to cut it. If it was a nicer restaurant the oranges would be pre-peeled and sliced and arranged on a platter. I ate a lot of oranges in Morocco and they were all delicious.

Pureed Fruit with Chopped Nuts
If the restaurant is getting really fancy, instead of serving oranges after a meal they’ll serve you a blended fruit smoothie garnished with chopped nuts–usually walnuts. These were made with oranges, strawberries, and bananas. They were refreshing, like something you’d sip on a beach chair in the tropics.

Cookies
While moroccans don’t normally eat sweets after a meal, cookies are often served with tea or eaten with soup. In the cities there are lots of stands and carts selling an assortment of cookies. Most of these are nut-based (either peanut or almond), and lots of them were coated in honey and very sticky. Orange blossom flavoring was also common. It was typical for the cookie stands to be covered in bees, which didn’t seem to faze anyone–they’d just brush off the bees before handing you your cookie.

Mint Tea
Mint tea is to Morocco what Sweet Tea is to the South. It’s commonly offered to guests as a sign of hospitality. It’s served warm and poured from a silver tea pot. When it’s poured the server will often try to lift the tea pot as high as possible to create little bubbles in the surface of the tea. No idea what that’s supposed to do, but I was told it was important! Like the Southerners and their sweet tea, Moroccans drink their mint tea really sweet. Like, unbearably sweet. (Daniel says “deliciously sweet”).

Avocado Smoothies
My parents grow avocados commercially, so I’m always interested in avocado recipes. I didn’t see a single use of avocados in a main dish or side, but I saw lots of instances of avocado “juice” listed on menus and street stall signs. The two most common ways to make an avocado smoothie are with avocado, milk, and almonds or avocado, milk, and dates. The result is thick, sweet, and creamy. We were told that Moroccans consider avocado smoothies a female aphrodisiac 😮.

2 thoughts on “Things to Eat in Morocco”