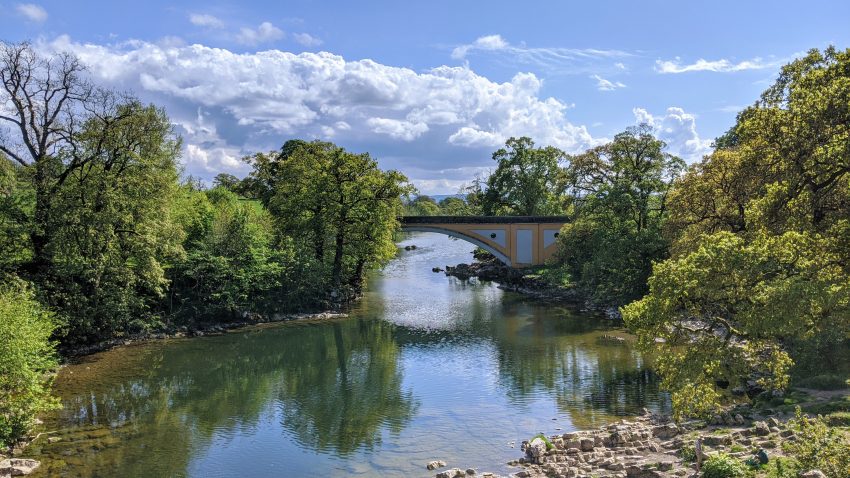 When Daniel and I started traveling our tentative plan was to spend the first half of the year  seeing different countries in Europe, and the second half traveling through Asia. Then coronavirus hit, and instead we spent three months in the United Kingdom; two months in England between London and the Lake District, and a little less than a month in Scotland.

For the most part, it was a great place to be locked-down. It was the first country we’d stayed in since January that spoke English, and it was something of a relief to be able to go into a grocery store and understand what was in the cans of food, and to be able to ask strangers for directions or make small talk with locals. We rented a car, bought a decent frying pan (the quality of kitchen supplies in most AirBnBs could make you cry), and generally settled in. The weather was beautiful–the UK countryside in spring is idyllic–wildflowers were in bloom, lambs were getting bigger, and the hills were covered with green grass.

We got used to driving on the other side of the road, shopping at Tesco, and converting pricing from pounds. On the other hand, except for grocery stores, no shops were open and there were limitations on how far you could drive and many parks were closed. So our experience of the UK was simultaneously deep, because we spent so much time there, and narrow, because what we did see was such a small sliver of the country. It was a strange way to see a place. Someday we will have to go back and do all of the touristy things, like visit the castles in Scotland, see a scotch distillery, go to the Roman baths in Bath, and shop in Brighton.

Anyways, here is a hodgepodge of takeaways we have from the time we spent in the UK:

The Food is Super Bland

The stereotype is true, British food is very bland and heavy. Think lots of roasted meats and mashed vegetables. One of the more common mashed vegetable dishes is the descriptively named “mushy peas,” which is commonly served with fish and chips. There’s also “pea-wet,” which is the liquid left when you make mushy peas, and is used as a condiment (gag).

Spicy food is hard to come by. We bought a can of Indian-inspired curry sauce from the grocery store and it was so sweet that it was almost dessert. Foods labeled as “spicy” were generally on the same heat level as Taco Bell mild sauce or just tasted kinda like ketchup.

What Brits do seem to eat lots of is chocolate. I was surprised to find that grocery stores have an entire chocolate aisle, where both sides are full of different types of chocolate. We ate a lot of chocolate during our stay. No complaints about this.

Outside of the Cities, the Population is Very Homogenous

This one surprised me because I always figured that Britain would have a very diverse population, given that they had so many colonies. But while that’s true of the cities, the countryside is almost entirely white. In more rural areas the farms have been passed down from generation to generation, sometimes for hundreds of years, and many people live on the same land that their family has worked for decades or centuries. The nice thing about this is that these smaller rural towns are tight knit and have a strong sense of community.

Houses in the UK countryside were all named. The names would be written on a plaque and attached to the side of the house or to the home’s gate. In the US, you wouldn’t name your home unless you lived in some super-ritzy mansion or were a little bit strange, but in the UK it’s the norm. Even identical townhouses would have unique names written and attached to them. We saw names like Wheat Cottage, Hillside Haven, Durie Home, Old House, New House, Rose Cottage, etc. Even odder is that the name of the home is part of the official address. And in smaller towns if people ask you where you’re staying you can say the name of your house and they’ll know exactly which one you mean.

Waiting in line for the grocery store everyone talks with each other. When you go out for a walk everyone says hi and waves, and occasionally you’ll be stopped for a longer conversation. People will tell you their entire life story if you stop and chat with them, and they are eager to hear yours. It was nice to be around such friendly people. Several of the locals even made invitations to join them for tea once the restrictions were lifted.

There are Lots of Flies

There aren’t any predators in the UK–no coyotes, bobcats, wolves, raccoons, etc. All of the wild animals that picked off my pet cats, rabbits, and chickens over the course of my childhood do not live in the UK at all. While this seems idyllic, on the other hand the UK has tons of flies. It doesn’t matter if you’re by water or not, near sheep or not, the air is thick with them. I would run trying to make windshield wiper motions with my arms to keep them out of my face, but I always ended up inhaling a couple anyways and had to stop to pick them out of my nose or spit them out of my mouth. It was gross.

I Learned a Lot About Sheep

Did you know that there are “self-shearing” sheep? I didn’t know before I saw a scraggly-looking ewe crossing a field while dragging along a long piece of wool that was still attached to her backside, like an unraveling mummy in a horror movie. Apparently wild sheep all “self-shear” in that they molt their wool when the weather gets warm. Domestic sheep have been bred to continue to grow wool so farmers can harvest it. (That’s why if domestic sheep get lost and aren’t shorn they run into all kinds of problems.)

However, some farmers don’t want to deal with shearing sheep. It takes an expert to shear a sheep, and if you are a hobby sheeper you may not want to deal with the expense of hiring a shearer. So, some sheep have had the shedding gene bred back into them, and every year go through a very mangy period where all of their wool unravels from them. It leaves the green fields covered with little clumps of wool, and I would guess that nest-building birds in the area love it.

It seems like every town and village has a fancy stonework hall or manor. I imagine it makes finding a nice wedding venue an easy task. True story, when we were planning our Bay Area wedding three years ago we were quoted ten grand to rent a dirt lot. We ended up getting married in a building built during the Great Depression, which, for the Bay Area, is a very old building. In the UK rural towns are full of homes that are hundreds of years old; the sense of historical time is different.

Speaking of old stone buildings, every town seemed to have a small stone church. They seemed to look remarkably similar–rectangular stonework buildings with a steeple at one end. Typically they were surrounded by an old graveyard with rows and rows of thin and tilted stone headstones, like you see in halloween decorations. Some of the dates of death on the stones dated back to the early 1800s. (Maybe some were even older, many were illegible from age and weather.)

Those old headstones usually listed how old the deceased was, what they did for their profession, the full name and relationship of the person who erected the headstone, and who they were survived by. Compared to the short phrases like “Loving Father” or “Walk With God” you tend to see on modern headstones, those old ones seem very verbose and informative. Also, it was shocking to see how many people died in their forties back in the day. Hallelujah for antibiotics and modern hospitals.

He-he. I just think it’s an amusing name. It sounds like something out of a mattress commercial. (“Are you a Rough Sleeper?”)

British and Scottish people seem to be very keen on long walks as a form of exercise. Whenever we were out we’d see dozens of other people walking. Rural areas seemed to have lots and lots of public walking paths, and they were always full of people. Maybe it was just the time of year that we visited, I’d be interested in seeing how many people walk when it gets cold and snowy, but it seemed like the exercise of choice.

While spending three months in the UK where, most of the time, we only left the house to walk, run, and shop for groceries was not part of our original plan, it was kinda nice. There are certainly worse places to be stuck than the Scottish or English countryside. Even though we had a lot of very slow days, on the other hand I feel very rested–like I’ve just come back from a months-long silent yoga retreat or something similar. Watching sheep mosey across a grassy field for hours a day is deeply meditative. If you feel stressed or need some R&R I recommend a visit to the UK countryside.

1 thought on “United Kingdom in Review”