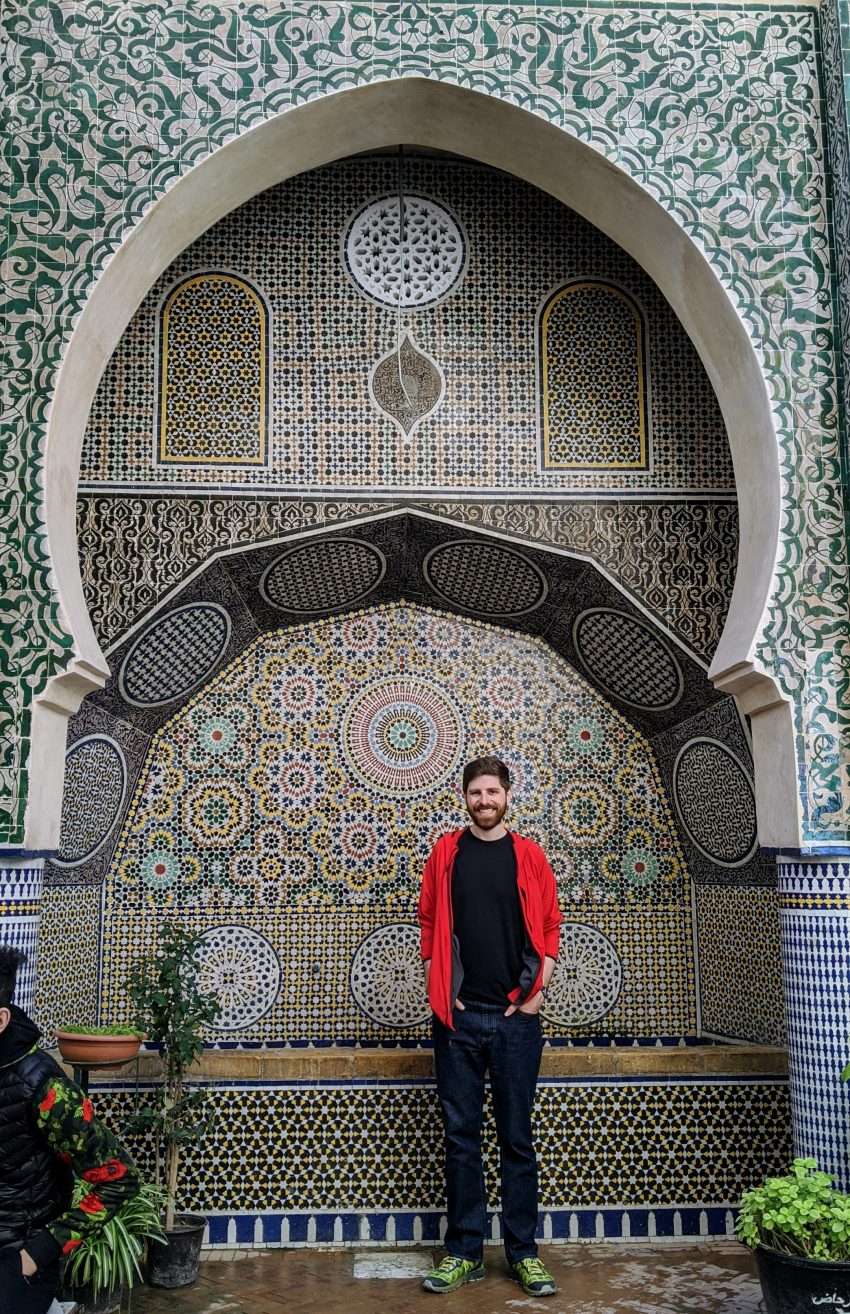 After our fiasco of a three-day tour Daniel and I were relieved to arrive at Fes. We stayed there only three-and-a-half days, and here are some of the things we did during that time:

We Got Lost Over and Over Again

Like Marrakesh, in Fes we stayed in a riad within the city walls. The medina of Fes is much more difficult to navigate than the medina of Marrakesh. The streets are very narrow (too narrow for two people to walk side by side), they are much more branched and twisting, and the buildings surrounding the paths are higher. It makes you feel like you’re a mouse in a maze. Google Maps is basically useless in those little streets, so lots of riads and restaurants will put up a sign at every branching point with an arrow showing you which path to take to reach them. On the bright side, the streets are too narrow for scooters, so there isn’t the constant smog that Marrakech has. On the other hand, getting lost at some point is basically inevitable.

We Dealt with Scammers and Pushy Salespeople

If navigating the streets weren’t stressful enough, the medina is full of kids (always boys) who will try to hustle you for money by “guiding you.” This is such a common scam that basically every online resource warns you about it, but there is no way to avoid these people. They’ll ask you where you’re going, and once they find out they will insist on “leading you.” Even if you know the way and tell them to leave you alone, they’ll run ahead of you and point the way at every intersection. At the destination they’ll demand to be paid. When you refuse, they’ll get mad and loudly tell any local that passes about what a “bad person” you are.

Even if they don’t know where you’re going they’ll run in front of you, block the path and insist, “No! You can’t go here! Muslims only!” or “Road is closed!” and then they’ll try to lead you somewhere else. Or they’ll follow you for a while until you come to an intersection where they’ll run in front of you and try to point the way to some destination. We were advised to never ever follow these people, because they will circle you though the streets until you are completely lost and then demand payment to take you back to your starting point.

People will approach you even if you’re sitting down and minding your own business and they’ll ask you where you’re from, where you’re staying (Stranger Danger 101–don’t ever tell people where you’re staying), and offer to be your “tour guide.”  This stuff happens all the time. It is a constant headache.

The biggest offenders are tween and teen boys. Morocco only has compulsory education up to age 13 (which is largely ignored in rural areas anyways), so these kids aren’t just trying to make some money on the side, this is like their full-time gig.

We had been told that Fes was lower-key than Marrakech, but after having visited I’m not sure I’d agree with that. While it’s true that Fes is less of a tourist destination, we found that the vendors and the locals were much more aggressive, and frankly meaner, than they were in Marrakech. Like Marrakech, Fes has many small vendor stands. (In particular Fes sells lots of leather goods, due to the tanneries in town, as well as a fair bit of metalwork.) However, we found that the vendors in Fes were pushier–maybe because there were comparatively fewer tourists.

Also, whenever we went out, little boys who saw me would point and scream “China! Corona!” I kind of rolled my eyes at this, but Daniel found this pretty upsetting. And I had this realization that Daniel, since he’s a man, isn’t used to having people harassing him on the street. Must be nice.

We Had The Worst Walking Tour Ever

The very first thing Daniel and I did in Fes was take a walking tour of the city . (After our three days in the desert I was very skeptical of doing any type of tour, but this was inexpensive and only supposed to be a couple of hours.) Our riad set it up and vouched for the guide. It started off fine but suddenly, about ten minutes in, our guide led us to a carpet shop where he left us. Then we were given the most high pressure sales pitch I have ever experienced by a very eager salesman who really, really wanted us to buy a carpet. The carpets were beautiful, but they were also around three grand, which is way more than I would ever spend without doing prior research.

Telling the carpet salesman no was almost impossible. (The man would literally pretend he didn’t understand us when we were like, “no way are we buying a carpet”). The fact that our guide had abandoned us made it worse because we didn’t feel like we could leave. It was incredibly uncomfortable. The salesman tried to pressure us by telling us how much we “insulted” him by not buying a carpet. (Which, sorry, but I will not pay three grand not to insult someone).

It was almost a half an hour before our tour guide reappeared, and when he did he also tried to convince us to buy a carpet. It became obvious to me at that point that our guide would be getting a cut of whatever sale was made, which made me very angry. By the time we made it clear that we would not be buying anything and left, all three parties–us, the carpet salesman, and the tour guide–were deeply disgusted with each other.

The tour ended shortly thereafter. After the carpet shop, our guide tried the same schtick at the Fes tanneries, where a tannery worker gave us a two minute “tour” before taking us to a room full of leather goods and asking us what we would be buying. By this time I was so irritated by our previous experience that I immediately said, “We are not buying anything.” Our tour guide got so enraged by this that he instantly ended our tour, which was fine by me. So, the lesson from this is that even legit tour guides will try to get you to buy something. Beware: everyone wants your money.

To be clear, I never felt like anyone in this city was dangerous. I was never afraid of being mugged or people getting violent. But I certainly felt that many people had no scruples about lying to us and wouldn’t hesitate to rob us blind had we given them the opportunity. Honestly, it just feels bad. You get the feeling that locals are not seeing you as a person, but as a means of $$$$ that they will try to exploit whenever and however possible.

We Saw the King

I saw my first ever head of state in the flesh in Morocco. On our first day in Fes the main street was closed and the sidewalks were crammed with children. One of the workers at our riad let us know that this was because the King was coming into the city to attend a ceremony for a new museum; the road was shut down for the procession and that all schools were closed for the day. Daniel and I waited with the crowd on the side of the street and got to see the King and his advisors drive by. Actually, I couldn’t pick the King out from the rest of his party as they were all wearing business suits.

One thing that was odd to me is that they were driving a hard-topped car so in order to be visible the passengers opened the car doors and stood with one foot inside the car and the other in the door pocket while they held onto the roof with one hand. This seemed so dangerous–and I was surprised that they would let the king take that kind of risk. I guess based on how the people in Morocco drive I should not have been surprised.

We Admired Lots of Beautiful Construction

I thought that Fes was a more architecturally impressive city than Marrakesh. You can see elaborate Moorish mosaic work from the 1200s, and 1300s all over the city. Our riad had a tile floor that we were told was over a thousand years old, along with elaborate carved wooden doors, stained glass windows, and mosaic walls. And while you cannot enter any of the mosques as a non-muslim, they let you essentially stand on the threshold and look in, and those are also covered in detailed tiled designs and carved plaster.

I Tried a Hammam

In many Moroccan neighborhoods there is a public bathhouse known as a hammam. They date back to the time when running water was less common. However, even today it’s typical for locals to frequent a hammam about once a week. (Though my understanding is that now people do it mostly to socialize). I thought this was interesting, but I wasn’t sure about getting publicly naked in an environment where I didn’t speak the language or know the protocol. Instead I booked a private hammam through a riad.

If you’ve ever been to a Korean spa, a Moroccan hammam is very similar in that there is both steam and scrubbing. You undress and enter a sauna. After a while an attendant comes and slathers you with savon beldi, a semi-soft black soap made from olives. Then they scrubs you all over with a gritty cloth to exfoliate you. (I believe that in a public bath house you can scrub yourself if you like, which is a bit cheaper.) The woman scrubbing me removed a pretty disturbing amount of dead skin, which she seemed very proud of. Then, you rinse off and you’re left with baby-soft skin. I tried to convince Daniel to do this with me and he absolutely refused.

In review, if I were to compare Fes to Marrakech I would say that Fes is much less touristy, which has some upsides and downsides. The upsides are that it’s less crowded and the food is better quality and cheaper. The downsides are that again, locals can be uncomfortably aggressive, it’s much more difficult to get around, and there are fewer attractions to visit. Fes is prettier, but Marrakech has better shopping in that there are many more options to choose from. If we were to visit Morocco again we would go back to Marrakech but probably not to Fes.

3 thoughts on “What We Did in Fes”